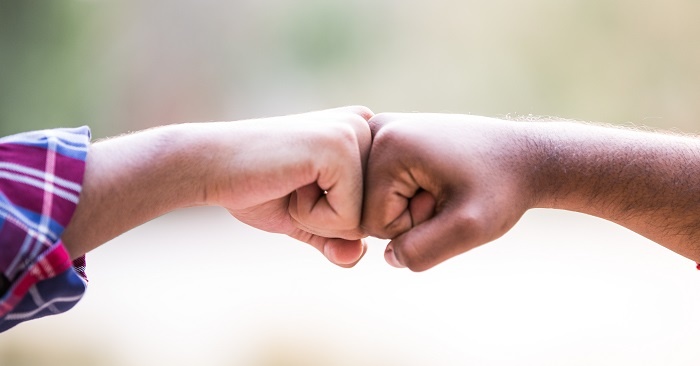 Spanglish—it’s a complex but fluid combination of Spanish and English, spoken at various levels and in various ways throughout the United States, Spain, and Latin America. It often shows up anywhere two or more young Hispanics gather for a conversation. They may be primarily Spanish-speaking, English-speaking, or equally fluent in both, but sometimes the Spanglish word just expresses the idea better than the English or the Spanish (semi) equivalent.

Here are a few of the most basic terms and how to use them.

To check. Using the catch-all chequear is a great way to simplify describing the process of verifying (verificar), revising (revisar), or old-school checking (comprobar).

To click. Used in place of the traditional verbs pinchar and apretar, or the semi-Spanglish hacer clic, clickear and its various conjugations often show up in ads for apps, software, and other computer-related products and services.

To Google. Just as in English, proper names can easily become verbs. That’s why googlear, as opposed to buscar en Google (search in Google) is the popular, more streamlined alternative.

Hamburger. The name of the stereotypically American sandwich—in English—means “from or of Hamburg,” as in Germany. In Spanish, the noun hamburguesa has the same meaning, but Spanglish-speakers bring it back to the source with hamburguer.

Heavy, intense. Only used in reference to intensity of situations or the fullness of food, not actual weight, heavy—and particularly ¡Ay, que heavy!—often replace pesado (literally, heavy) and fuerte (strong or intense).

To hang out. Instead of pasando el rato (spending a little while), these days, the youngsters in New York van a janguear (go to hang out).

To (hyper)link. While this term is used in place of hacer un enlace (make a link) in a technical sense, it isn’t unheard of to use linkéanos (connect us) in social settings as well.

To leak. While Spanish has two verbs for that annoying drip-drip in your kitchen sink—gotear and fugarse—it’s just more fun to tell the plumber that “el grifo está liquiando” (the faucet is leaking).

To match. Whereas combinar (combine) had been the historical Spanish term, Spanglish speakers sometimes use machear when coordinating.

To send an email. As opposed to the lengthy mandar un correo electrónico, mandar un mail is as quick to say and write as sending un mail.

To send a Facebook message. If you thought “friending” someone on Facebook was already a major transgression against English, how about mandando un inbox instead of sending a mensaje (message)?

Computer mouse. Even though the Spanish word for the furry little rodent is ratón, the sleek little apparatus attached to the computer is simply el mouse.

To park. Not only is parquear preferred in some Spanish-speaking countries, some directional signs have “P” for parqueadero (parking garage) instead of “E” for the traditional estacionamiento.

Roof. That thing on top of the house? The one Hip Hop fans say is on fire, or that they’re raising all the time? The hot, tin thing that cats are so fond of? In Spanish, it’s a techo. In Spanglish, it’s a roofo.

Shopping mall. While centro commercial (commercial center) might be even more technical than “shopping mall,” modern-day mallrats just might tell mami to pick them up at el shopping.

Top. Instead of the best of something being lo mejor, just call it lo top.