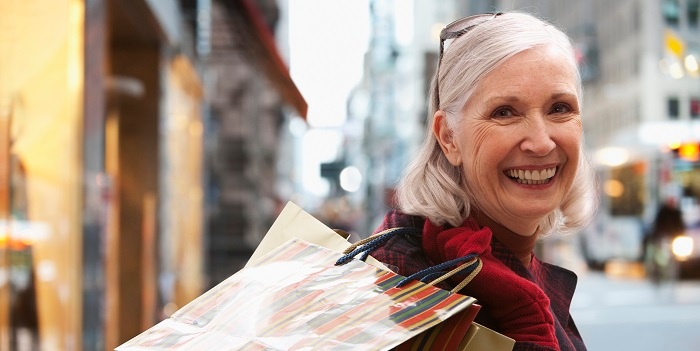 Companies around the world are getting creative in redesigning products and services to cater to this demographic. What do you need to know to better serve this demographic globally?

Japan, where almost 25% of the population is older than 65, has the highest percentage of people aged 60 and up. Older customers are a significant retail opportunity here, and companies have long warmed up to them. Retail chains such as FamilyMart and 7-Eleven redesigned their stores to target the over-50 crowd. The stores feature a subdued color scheme, dark wood flooring, wider aisles, smaller packaging, and nursing-care consultation desks, among other things.

Exclusive targeting works in some markets and doesn’t in others

NTT Docomo launched a smartphone exclusively for the elderly in Japan nearly five years ago. The handset showed large fonts and icons with simplified steps for emails and taking pictures.

Creating products exclusively to the elderly may be well accepted in Japan, but that may not be the case everywhere. One good example: the baby boomer generation in the United States. More and more, boomers want to be marketed to in a way that is relevant to them—but they don’t take kindly to being put in a box of their own. A senior friend in my Facebook network once resented how diapers for babies were called Pampers or Huggies, while adult diapers were called Depend.

The very notion of what it means to be old is not static anymore. The silver segment of tomorrow will be more different from that of today. Companies need to acknowledge this and cater accordingly.

The aging are unequal and diverse

As with any other demographic, there’s diversity in this bracket, too.

According to a McKinsey report, 60-plus-year-old French buyers have 20–30 percent less disposable income than do 40- to 50-year-olds, but their number is growing two to three times faster than the latter segment. This pattern can be seen not only in France, but also all across Western Europe.

In Japan and South Korea, a full 40 percent of the region’s consumption growth is expected to come from the 75-plus age group. But in Western Europe and the United States, the rapid growth is coming from 60- to 75-year-olds, where baby boomers are shifting.

Again, there are differences in the consumption patterns of the elderly around the globe. Traditionally, Northeast Asia has been a region where the older generations invested heavily in the younger generations. They tend to be much more frugal in their spending patterns than baby boomers are.

Every sector—not just healthcare—needs to adapt

It’s usually the healthcare sector that takes most seriously the need to adapt to aging customers. But according to a Euromonitor report, the tech sector, too, must give this segment more thought: “The millennial passion for wearable trackers … is tempered by the reported difficulties that older consumers face in syncing wearable products with their computers or understanding user directions.”

Similarly, many other verticals could benefit from considering how they can reinvent themselves to become more attractive to seniors.

Aging customers are already getting online, though their point of entry mostly seems to be through social media such as Facebook or messenger apps such as WhatsApp. Their exploration of the web is typically limited. There is potential here, but one of the chief ways of exploiting it would be to offer more local language content, because older customers are more likely to prefer it over an alien language.

Serving the aging population (in both developed and developing economies) will take some sensitivity as well as innovation. Though there are common threads in terms of the needs of this segment, the products and services created for them will need to take into consideration local-market as well as consumer preferences.