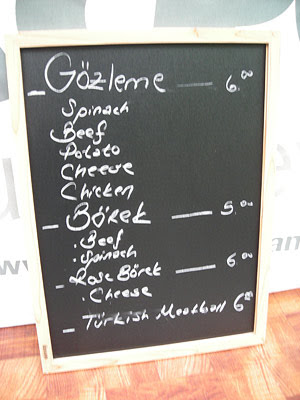 I’m a foodie, and I like to travel, and I generally prefer to be safe rather than sorry, so I think Google Translate’s new photo translation feature is the shizzle.

Picture (pun intended) yourself Turkey trying to read the menu in front of a restaurant.  You are a vegetarian, you are starving, but you don’t understand what they are serving.  Turkish cuisine, as you have found out, is a bit carnivorous.  You take a photo with your Android phone and Google sends you a text translation.  You see that the restaurant’s daily special is Imam bayildi (a stuffed eggplant dish) and menemen (an egg dish). These are both things you eat, so you go in.  Phew, no more goat-based dining disasters, no more trying to pantomime a carrot!

This is cool and this is real and this is useful.  Traveling in a foreign country – eating, taking public transportation, buying something, crossing a street – can be a bit too much adventure if you don’t understand the language. Thank you, Google; this mobile ap can reduce that fear factor.

How does it work? Google, being Google, has billions of sample data, such as phrases and audio clips in hundreds of languages. Google maps these bits: one random variable (your menu item) has a parallel in other languages. It does this by crunching statistics, using algorithms and building analytics—wait, you don’t need to understand this; you are just trying to feed yourself.

So…you take a picture of it and highlight (swipe) the part you want Google to translate. You choose the language you want Google to try to read.  The ap will then recognize and understand the characters from your image.  Then, Google casts a line out to the data bits I mentioned above, finds a Turkish equivalent to what it has read, and spits it back out to you.  Quickly. Correctly (though you can correct the interpretation, if you see Google has gotten it wrong, which will almost never happen).  And for free.  Why is it free? Because you are adding to Google’s considerable data bank!

This new feature is language-limited but I can assure you not for long. For now it works with English, Dutch, German, Turkish, Russian, Italian, Spanish, French, and a few others, but mostly languages that use Roman characters.

Go get it now and stop getting lamb surprise: http://www.google.com/mobile/translate/