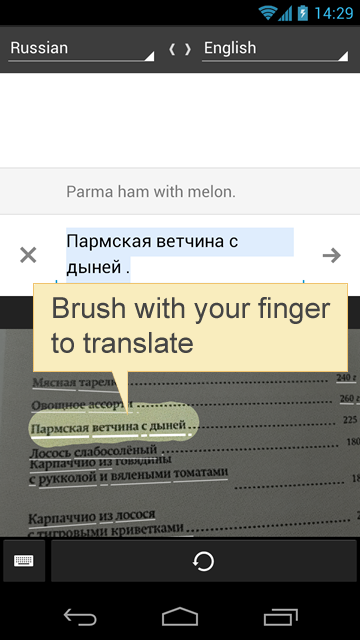 Ever have this moment? You’re in a foreign country, standing in front of a bold-lettered sign that’s trying to tell you something really important, but you have no idea what it is. The sign featuring a huge wave: a great place to surf or a tsunami zone? Or in a hospital, do those red letters mean “register here” or “do not open”? The latest release of Google Translate for Android smartphones now includes OCR (optical character recognition) technology. You can use your phone to take a picture of a foreign-language sign or menu, rub over the words that you don’t understand, and Google will translate them for you. Ah, the wonders of machine translation …

Yes, wonders, but not totally revolutionary, as many reviewers have pointed out. An app called World Lens, which came out in 2010, also does the same thing, but it only supports English, French, Italian, and Spanish. The image feature on Google Translate, which is available for Android 2.3 (a.k.a. Gingerbread) and above, currently supports 11 languages: Czech, Dutch, English, French, German, Italian, Polish, Portuguese, Russian, Spanish, and Turkish. And Google has reportedly promised more to come.

To be fair, the image translations from both World Lens and Google are sometimes less than perfect. Mobilemag.com noted in their review that the Google-translated German sign for “no kites allowed” became “dragon fly not allowed.” (Sad in either case.) And arstechnica.com has reported on some funny mistranslations from World Lens.

The biggest drawback for Google Translate is probably that you have to be online to use it—which means you need either an international data plan for your phone or access to a Wi-Fi connection.

Nevertheless, there is a big point in Google’s favor: while World Lens charges a download fee for each language, Google Translate for Android with all its attendant languages is free. Perfect for budget travelers, wouldn’t you agree?

Have some examples of your own to share, smartphone traveler? Let us know in the comments.