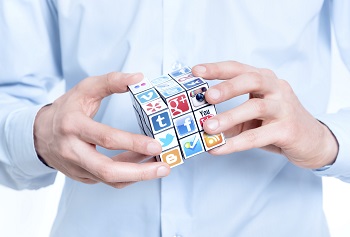 Yet, if companies aren’t marketing in languages other than English, they may not be capitalizing on the global connections that social platforms offer. Since the number of non-English speaking Internet users continues to rise, the necessity to communicate in native languages becomes essential for companies that want to connect with these potential customers—before the competition does.

W3Techs.com just released a survey affirming that English commands 54.9% of web content with German ranking a distant second at 6.4% and various other languages represented by a few trickling percentages here and there. So, why tackle the difficulties of going multilingual or invest resources that must be spread out across various languages?

Tech experts at Mashable say that communicating in multiple languages could boost a company’s page rankings. They assert that the web is saturated with English language content and that competition for key search terms is keen. On the other hand, they also report that “the saturation of key search terms on non-English language websites hasn’t reached anywhere near the level of the English-language web. This means that businesses can attain high — and lucrative — positions on search engines far easier on the foreign language Internet.”

Moreover, English web content aside, the majority of global Internet users do not speak English as a first language. Other than the U.S. which holds the number two spot when it comes to the worldwide number of Internet users, China ranks number one. Nations like Brazil, India, and Japan also rank high, according to the European Travel Commission. Communicating in first languages as opposed to just English appears to be a viable solution for connecting with all social media users.

Search Engine Journal asserts that “establishing a global presence across all social media platforms will help increase your brand awareness.” Ideally, a company’s presence on a social network will serve as a portal to their website. The social media networks can help companies meet their marketing goals nation by nation. Still, multilingual marketing via social media is not without its limitations — understanding the ins and outs of each platform is important for competent marketing campaigns.

The world may like to tweet, but the Japanese love to! According to a recent Convonix infographic about global usage of social media, “Japan is the only country where Twitter is more popular than Facebook.” Yet, before companies begin to tweet in Japanese, they may want to open a separate Twitter account designed just for Japan. They otherwise risk alienating non-Japanese followers with their tweets. When it comes to tweeting in multiple languages, a single brand still needs to create multiple Twitter accounts to communicate in various languages.

Companies on Facebook used to have to create separate account pages, similar to Twitter, to market in multiple languages. In the past year, however, Facebook decided to streamline the process for companies and allow them to tap into Global Pages.

While Facebook’s one-account approach to multiple languages seems simple, it can create challenges. All users may see the same content, but in their own language. Marketers must now address tough questions: Should they address the people of Paris as they would the people of Penang? How will cultural differences influence the message? What about time zones and the release of time-sensitive marketing campaigns? Using the new Facebook tool to broadcast the same message may be disadvantageous. Instead, marketers may want to customize the pages within their Facebook account to communicate effectively with each individual culture or region.

How Do You Communicate One Brand through Many Languages?

No matter what social media website is used, the key is to understand its specific tools and to craft the message for each target audience or, in this case, each language.

When in doubt, learn from some companies that have already tapped into platforms like Global Pages.

According to social media watch group Inside Facebook, companies like Burger King, PlayStation, and Swatch have recently made the switch to multilingual social media. Users are automatically sent to the language page based on their country, but they can also switch regions and view the companies’ other pages. Just last week The Times of India reported on Blackberry’s Facebook success and how the global metrics of Facebook’s Global Pages is benefitting the brand worldwide.

With these and other companies speaking in multiple tongues over the social media platforms, a single brand delivered by a diverse stream of languages is likely to be a major priority for global companies.

Getting to end users first with an effective message in their own native language could mean a rush of “likes” or a profusion of “retweets” that will, hopefully, translate into greater profitability and other benefits — like successful communication of the brand all over the world.