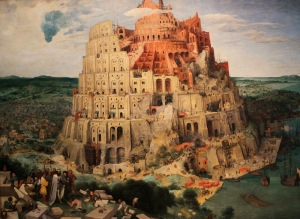 Some days it seems like technology has all the answers. As linguists rush to the remote places of the world with their tablets and recorders in an attempt to rescue and preserve dying languages, others are using computers to decipher dead languages — long-lost languages that have not been spoken in 7,000 years.

Cracking the code of these lost languages is something akin to gathering all the lost tribes of the world, today’s multinationals, together to witness the translation at Babel. Only it isn’t a tower we congregate around; it’s a computer and it seems everyone wants to hear what it’s going to say.

Using computers to unravel ancient languages appears to have worldwide interest. When a group of Berkeley and University of British Columbia paired up to use computers to “quickly reconstruct protolanguages — the rudimentary ancient tongues from which modern languages evolved,” as Science Daily put it, news agencies across the world converged on the story — from the BBC to The Tehran Times.

The Tehran Times reported that this computer language program “is widely seen as a major advancement for language technologies in general.” The report suggested that the programs algorithms could be engineered to “recreate dead languages.”

National Geographic and other news agencies have also been reporting on another computer program that was developed by researchers at the Massachusetts Institute of Technology (MIT). Using their technology, researchers are deciphering scripts that were discovered by archeologists in the 1920s. “The program automatically translates written Ugaritic, which consists of dots and wedge-shaped stylus marks on clay tablets. The script was last used around 1200 B.C. in western Syria.”

The idea that computers could assist in the deciphering process has been batted about for some time, but it is just lately coming into fruition. The Berkeley research team “reconstructed a set of languages from a database of more than 142,000 words that form 637 Austronesian languages, many of which are spoken in Southeast Asia, the Pacific, and regions in Asia,” according to Catholic Online. Their program was able to uncover how some languages even sounded.

MIT and its Ugaritic research team used a “type of probabilistic modeling common in artificial-intelligence research” to make alphabetical mappings based on their own hypothesis. They successfully determined the Ugaritic language probably “is closely related to some other language.” They decided to try Hebrew and their program has been able to demonstrate similar mapping patterns in both languages.

The Smithsonian reported on an international group of “computer scientists, astrophysicists and a mathematician” who are using computer technology “to measure the conditional entropy of the Indus script,” which is a 5,000-year-old language. Thus far, their research can only confirm that the Indus script is, in fact, a language, but translation is still a long way off.

Researchers from Oxford’s Ashmolean Museum, according to the BBC, are also using computers to decode ancient texts. Their work concentrates on Proto-Elamite, “the oldest undeciphered writing.” This writing was “used between around 3200BC and 2900BC in a region now in the south west of modern Iran.” The researchers humorously referred to themselves as “Indiana Jones with software.”

With all the press about deciphering these old texts, it still remains to be seen what they actually say. The Ashmolean group admitted that they still could not decipher basic words like cow or cattle, though they have “deciphered 1,200 separate signs.” Dr. Dahl of the Oriental Studies Faculty, acknowledged the difficulty in deciphering Proto-Elamite: “There are no bi-lingual texts and few helpful overlaps to provide a key to these otherwise arbitrary looking dashes and circles and symbols.”

Certainly, these teams and their computers must be making out some words or it wouldn’t be news. But, when scouring articles about these teams from sources like ABC, The Huffington Post, BBC, National Geographic — well, there’s no word yet on any one word. The computerized deciphering is in the works, but we’ll have to be more patient to find out what they say.

Though, leave it to the good-timers at Time Magazine who did make one revelation: “a word like ‘alcohol’ survives more or less in its original form from Sumerian, a language spoken in southern Mesopotamia since the 4th millennium B.C. In other words, we haven’t figured out “cow” but we’ve got “alcohol.” Fair enough and perhaps even Indy would drink to that.