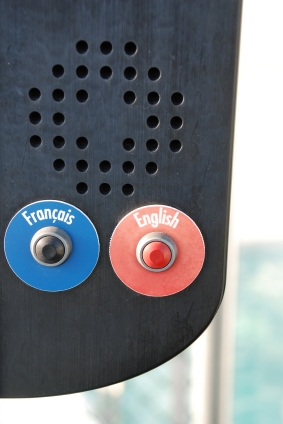 Last week in France two things happened in language history. The first is that the 2014 edition of France’s most popular dictionary, the Petit Robert, finally decided that they have to include a word for the French kiss: galocher. The second is that the French people — speaking against the initiative of their own government — told the English-speaking world to, er, kiss it.

In case you haven’t been abreast of the news, the French Parliament has been in debate regarding the 1994 Toubon law that mandated, among other things, that French be the official language of instruction in workplaces and government-financed schools. That doesn’t sound so bad at first — “in France, we work and teach in French.” In practice, however, it’s been a blow to businesses and programs in international business, the sciences, and technology for which English has become the world’s lingua franca. Teaching in English, the language of these fields, has meant that public institutions risked running afoul of the law.

The parliament’s proposal — drafted by French Minister for Higher Education and Research Geneviève Fioraso and adopted last Thursday, despite the controversy — sought specific exceptions to Toubon for these fields. She argued that allowing English in publicly funded institutions would help both to draw foreign talent to France’s universities and prepare French students to compete in an increasingly English-language-dominated marketplace. She also argued since many private business and science institutions had already started teaching in English years ago, the 1994 law was effectively creating a two-tiered educational system — one enabling the French governing elite and another crippling the broader French public.

While many academics embraced and supported this change in the law, some large and powerful organizations, notably the 378-year-old Académie Française, fought against it. It will “impoverish and marginalize” the French language, said opponents. Some even went so far as to accuse Minister Fioraso of “linguistic treason,” an undermining of France’s national sovereignty.

The national debate aside, there is no denying the dominance that the English language has come to have in business, science, and technology. The data is loud and clear: there are 1.5 billion English speakers worldwide of which only a quarter are native speakers. Moreover, as Minister Fiorosa pointed out, France’s European neighbors have already seen the utility of offering university-level courses in English as a way of attracting scientists, researchers, and global business professionals from Korea, China, and Japan, leaving France in the academic dust.

When learning English is a career-defining factor in these fields — as an anonymous group of researchers and scientists wrote in a statement to Le Monde in April — excluding English instruction is the equivalent of trapping France and its own students in a “linguistic bunker.”

As a translation company, we of course understand and encourage the fight for language diversity. Those same students that are learning in their second language are still making purchasing decisions, choosing their life paths, and participating in national debate in their own language.

There’s no question whether French will become again the world’s global language. That ship has sailed. No, what’s at stake, and why we support the decision of the French government to embrace English as a learning aid in the public universities, are the opportunities for all of us to enjoy foreign cultures, to learn new native languages, and nevertheless embrace what common tools we do have for communicating and learning.

Briton Peter Gumbel, who teaches in English at Paris Institute of Political Studies, commonly called Science Po and known as one of France’s most prestigious schools, had this to say to reporters: