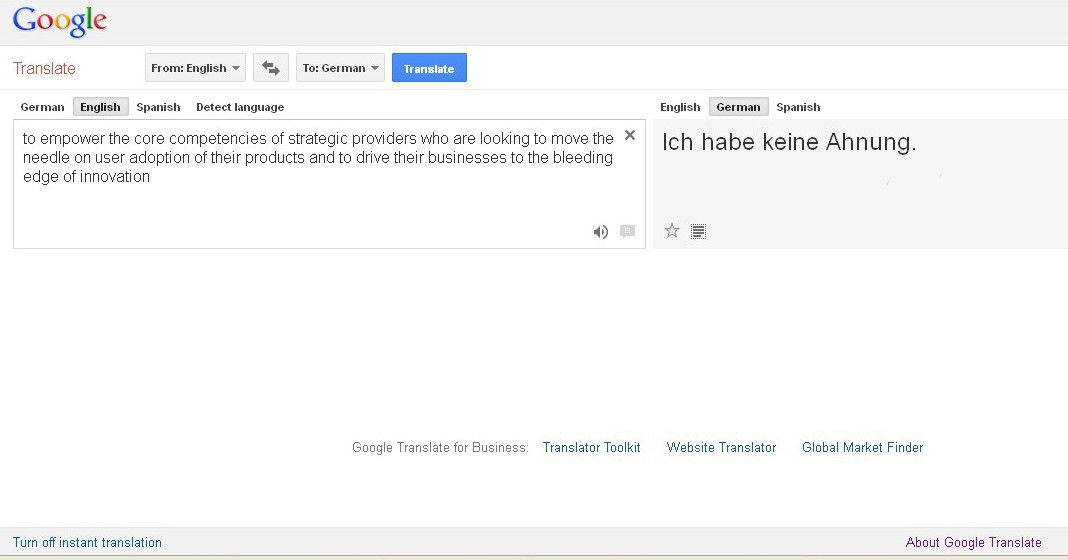 Well, look, we’ve warned you time and again not to use Google Translate for your precious marketing materials, but if you’re going to insist on doing it anyway, here’s our tips for keeping you from looking like a complete fool miscommunicating with your customers.

First, for the others trying to understand all the hubbub about Google Translate:

Google Translate is a free, online tool for translating sentences, documents, and websites among 71 languages. It is a statistically based machine translation — a process by which a whole lot of human-translated documents are analyzed by computer software that then digitally translates the vocabulary and grammar of any language into another. The tool — launched in 2007 and saved from the trash bin deprecation by worldwide community protest in 2011 — is one of Google’s signature products. With more than 200 million users worldwide monthly translating words into 71 languages, Google Translate is doing a lot of things right.

In addition to core translation tools, Google Translate also has a set of surprising features that are a boon for n00bs and experts alike, such as translated search and direct-in-toolbar translation.

It’s why rank amateurs savvy marketing professionals turn to it for the translation of their company’s most precious client-facing texts.

Okay, our strongest warnings summary statements and key arguments aside, here’s our top tips for making the best of Your. Worst. Task. Ever.

As everyone knows, most corporate presentations, both online and offline, are littered with “business speak,” a language of its own. Forbes has a post on 45 of the most annoying examples of its terminology. And if the article’s 198 comments have anything to show, plenty of people — including those who use business speak daily — loathe the experience.

And so does Google Translate. It can speak some of the most obscure languages on the globe and yet be stumped by pledges “to empower the core competencies of strategic providers who are looking to move the needle on user adoption of their products and to drive their businesses to the bleeding edge of innovation.” German translation in English: What the …? 1

If you want to use Google Translate, do yourself and your consumers a favor by writing source text in short, simple sentences that Google can translate so that even a child could understand.

Remember: Garbage In, Garbage Out

In its automated translation guide for government agencies, the U.S. General Services Adminstration notes aptly that “the work of a translator is never about translating words but rather about deconstructing messages.” That means that the best results in translation start with a well-written and meaningful source text. It’s about more than avoiding jargon — the challenge is to provide engaging marketing messages in simple, well-written and error-free texts that follow the grammatical rules of your own language. While translators and interpreters are going to “get it,” Google Translate is going to take your meaning literally.

Moreover, as even this blog post shows, there’s plenty of room to play in talking to your customers thout makin’ it so they ain’t got a clue whatchoo sayin’. If you’re going to use Google Translate in a pinch, skip the dialect, slang, and Twitter-speak and feed it good content.

Have a Plan B

Your desire to speak French like a Frenchman may have to involve the good people of France themselves. Mon Dieu!

I know, as a translation provider we appear to be a bit biased when we say that nothing beats professionally trained human translators for reproducing the real meaning of your most truly baffling marketing materials eloquent slips of the tongue. But, trust us on this — we know what we’re talking about. Post machine translation proofreading and editing could, at least, save you from the most embarrassing moments.

1 Of course, this is a manipulated Google Translate image. The real German translation was just as unintelligible as the English.