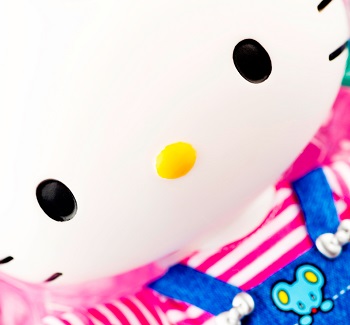 Back in 2003, a man turned to his wife and said, Do what you love. Simply take one of your hobbies, something you already enjoy doing, and see about earning a little money with it. At the time, his wife had a small collection of Hello Kitty items so when she asked — Hello Kitty? — he encouraged her.

It was only in hindsight that he realized what a huge mistake that was.

As our hero belatedly learned, Hello Kitty — the signature product of Japanese producer Sanrio — has fans (or, depending on your perspective, fanatics) from all corners of the globe. What began as a small experiment for his wife became a full-time, home-based business. With Hello Kitty toilet paper in the bathroom, a Hello Kitty toaster in the kitchen, and his wife’s Hello Kitty underwear in the bedroom, it is perhaps no surprise that his blog on the experience is titled Hello Kitty Hell.

Thousands of products later and email flooding his inbox from around the world, he had to admit that, apparently, the feline has her devoted followers.

Just don’t call her a feline.

She’s Not Your Average Girl

The controversy started with an article in the Los Angeles Times, in which writer Carolina A. Miranda’s reporting on the cat-not-cat’s 40th year anniversary retrospective exhibition included this statement:

Hello Kitty is not a cat.

You read that right. When [University of Hawaii anthropologist Christine R.] Yano was preparing her written texts for the exhibit at the Japanese American National Museum, she says she described Hello Kitty as a cat. “I was corrected — very firmly,” she says. “That’s one correction Sanrio made for my script for the show. Hello Kitty is not a cat. She’s a cartoon character. She is a little girl. She is a friend. But she is not a cat. She’s never depicted on all fours. She walks and sits like a two-legged creature. She does have a pet cat of her own, however, and it’s called Charmmy Kitty.”

I grew up with Hello Kitty everything and all I have to say is, MIND BLOWN.

The statement generated no end to public debate. Twitterers tweeted. Facebookers faced off. Buzzfeed called it, in caps, LITERALLY THE MOST SHOCKING THING IN THE ENTIRE WORLD. (We hope the Buzzfeed writer doesn’t mean that, er, literally.) Even traditionally minded business blogs like Entrepreneur, Fast Company, and Business Insider took up the banner. “Not a cat!” they all declared as one.

The answer from Sanrio?

That’s not what we said.

You Just Don’t Understand Me

We’ve written our fair share about the demanding nuance of marketing translation. And we make no bones about our different experience with Japanese localization. So perhaps you readers are in no way surprised to learn that this was a miscommunication matter.

The Wall Street Journal wanted to set the record straight (or, at least straighter) by publishing their follow up call with a Sanrio representative.

WSJ: What is Hello Kitty?

Mr. Tohmatsu: It is a character, a 100% personification done in the motif of a cat. This is nothing new. We’ve always had this setting since Hello Kitty made its debut 40 years ago.

Mr. Tohmatsu: We have a character called Kero Kero Keroppi as well, and that character is a frog, because it has elements of frogs in what he does. But Hello Kitty doesn’t [have elements of a cat]. It is more of an anthropomorphism.

WSJ: So it’s correct to say she is not a cat?

Mr. Tohmatsu: It is difficult to answer that question, but our answer is that Hello Kitty is a personification of a cat — a character.

Well, that clears up matters.

Too Cute for Words

Kawaii (“cute,” “lovable,” “adorable”) culture of Japan is the bread-and-butter basis of the Sanrio corporation. The Hello Kitty brand alone is valued at some $7 billion, driven in large part by strong sales among Japanese and U.S. consumers but shared with other fans across the globe.

And there is evidence to suggest that the monetary value of this “cute” aesthetic movement is a gold vein ready to be tapped. In a 2012 study entitled “The Power of Kawaii” that was published by science journal Plos One, scientists from Hiroshima University established that subjects shown photos of puppies or kittens performed their tasks better than those who didn’t have the (certainly awesome) chance.

Of course, there was no word on whether a picture of the kitten/not-kitten Hello Kitty would have the same effect. But at least one very harried husband and his raking-in-the-money, Hello-Kitty-loving wife may have something to say on the matter.