Businesses around the world need to sit up and take notice of the new wave of Chinese companies that have reinvented themselves for global markets. What makes these companies different from their older peers of even a decade ago? And what will it take for Chinese companies to flourish abroad?

Forget about copying business ideas from the West and spinning off Chinese versions. These days, businesses in China are a lot about innovating for their domestic markets first; setting up shop abroad is secondary. Take Ofo and Mobike, for instance. These rival unicorns didn’t invent the bike-sharing business, but they made it smart. Users looking to rent bikes can simply use a Global Positioning System (GPS) to find the bike nearest to them instead of having to go to the nearest rental facility. Enthusiastic bikers looking to help make China’s cities greener latched on to the idea.

The Economist recently wrote about the current crop of Chinese entrepreneurs who have been educated abroad or who are backed by foreign investors. As a result, local startups have “world-class people and technology at their disposal.” They also have the world’s largest market for their enviable playground. What else could a startup ask for?

The Chinese government is encouraging a move away from heavy industries towards the services sector. The country’s entrepreneurs couldn’t agree more.

The upcoming startup verticals in China have all directly or indirectly been involved in robotics, artificial intelligence (AI), or fintech. In fintech, China has a clear lead over the US in the world of mobile payments (see the chart below from the Financial Times). 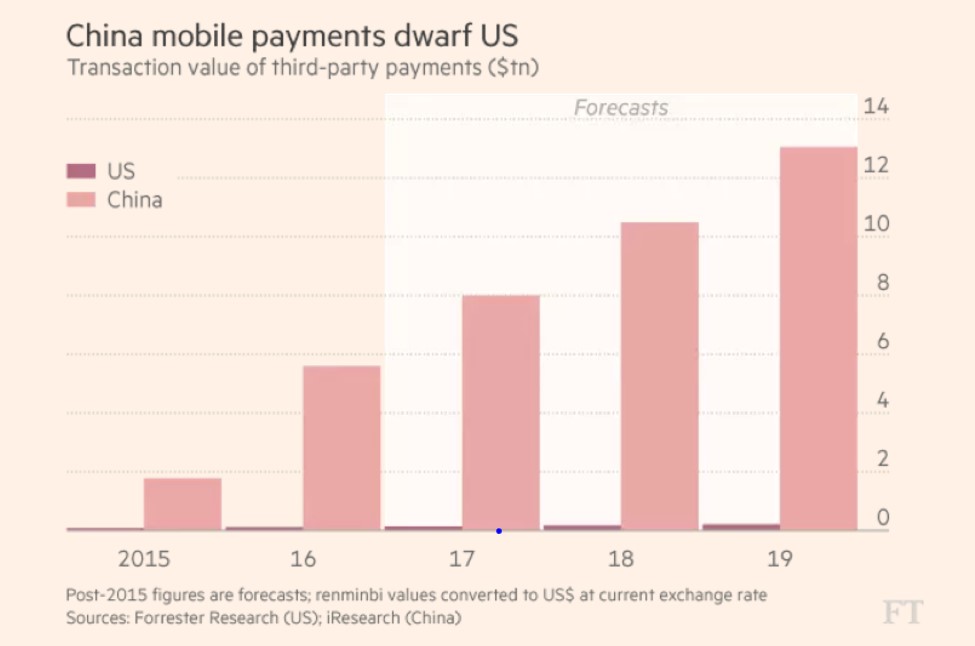 Companies in these verticals are well backed by public as well as private funding and will help China further bolster its place in the world economy.

Despite their aggression and advantages in their domestic market, Chinese companies are not guaranteed success overseas unless they adapt well. They must contend with not only different regulatory environments but also diversity of customer preferences. For instance, Chinese customers are usually more willing to experiment than their Western counterparts are. They are also often forgiving if something is not perfect. But Chinese companies will have to learn that in some markets abroad, you must get it right the first time—there are no second chances.

And not only will these companies have to learn to contend with market forces without a protective government watching out for them, Chinese personnel will need to adapt to work environments quite different from what they are used to.

As People’s Daily’s English app launch showed, the Chinese government and Chinese businesses recognize the power of language to open the gates to the global market. But they need to be sensitive to the fact that English alone is not enough. Emerging languages are beginning to command more and more purchasing power, and their speakers demand that they be served in their own languages.

Chinese companies also need to be aware of localization and internationalization issues that might come up when rolling out apps and websites in English and other languages.

But really, there’s not much that will hold back Chinese companies. They have deep pockets and an insatiable appetite, and are battle-hardened. While different local markets may still pose challenges to these newcomers, companies everywhere would do well to be prepared for the competition.