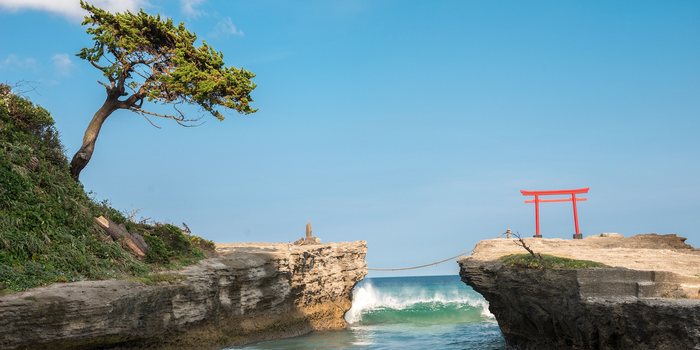 Japan Inc. A monolithic society with people of the same ethnicity, sharing the same language, the same values, and wearing the same business suits. That might be your image of Japan, but take a closer look and you’ll see a gaping crack right down the middle.

Did you know that everything from cuisine to comedy, and even which side of the escalator people stand on, can be divided into East (東) and West (西)? Just to illustrate my point, the two halves of Japan even have incompatible power grids, as the eastern half uses 50Hz while the western half runs on 60Hz 100V AC.

First, a brief (and oversimplified) history

For centuries, power in Japan was concentrated in and around Kyoto where the emperor’s court resided. The nobility hired professional warriors, or samurai, to do the dirty work of governance, and wound up relying on them far too much. Eventually, two samurai clans, the Taira (or Heike) of the west and the Minamoto (or Genji) of the east, clashed at the Battle of Dan-no-ura in 1185 to decide which would rule Japan “on behalf” of the emperor.

The Genji won and set up Japan’s first shogunate government in Kamakura (present-day Kanagawa Prefecture) whilst the emperor ruled figuratively from Kyoto.

Fast-forward four centuries, and the country is falling apart with warlords everywhere vying for regional dominance. After failed attempts at national unification by the Oda (because their leader was assassinated) and his successor Toyotomi (he died too), the Western Army (西軍) of clans loyal to the Toyotomi led by Ishida squared off with the Eastern Army (東軍) led by the Tokugawa clan at the Battle of Sekigahara.

Many movies have depicted this decisive battle, including one fresh off the set this year.

And let’s not forget all the video games based on this battle, from the realistic and tactical KESSEN series by Koei, to the fantastically flamboyant BASARA series by Capcom.

As the Eastern Army emerged victorious (oops, spoiler alert!), the economic center of Japan also shifted eastward from Osaka to Edo where the Tokugawa shogunate ruled Japan for two-and-a-half centuries (and the Emperor remained the titular monarch in Kyoto). Edo was subsequently renamed “Tokyo” 268 years later after western samurai clans that lost at Sekigahara formed a coalition to oust the Tokugawa and restore imperial rule in 1868. That’s the backdrop.

Sekigahara in your soup, and mochi more 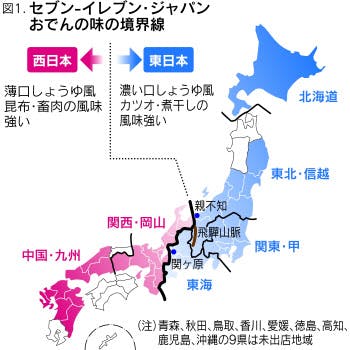 Fast-forward to today, and the east-west battle rages on in a variety of unlikely places, like oden soup. The east prefers a darker soup with robust taste while the west prefers a lighter soup with more subtle taste. This consumer preference is so clearly defined that 7-Eleven and other convenience store chains market different flavors to different regions, with the line of demarcation running roughly through Sekigahara.

The same goes for the soups of soba and udon noodles: robust bonito stock in the east, subtle kelp stock in the west. Mochi rice cakes are typically rectangular in the east and round in the west. And so on and so forth…but the differences don’t stop at the dinner table. 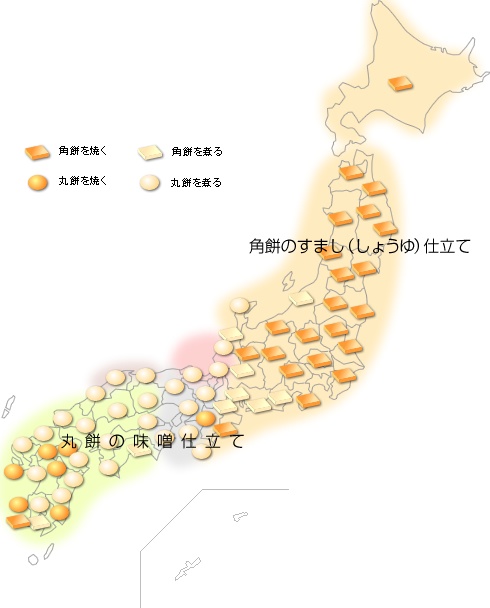 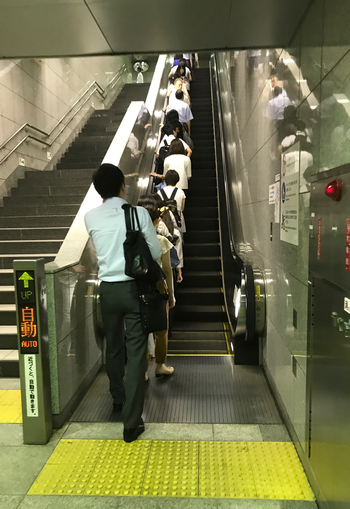 Tokyoites stand on the left, leaving room for people in a hurry to rush up the right. As you might have guessed, Osakans stand on the right and let folks walk or run up the left side. Some say this difference has to do with Tokyo having a samurai tradition, favoring bearing left when encountering strangers to draw swords more freely, versus Osaka’s merchant culture where people want to protect their valuables carried in the right hand.

An alternative theory is that Tokyoites stand on the left just like cars drive on the left side of the street in Japan. People walk up the right side the way cars use the passing lane. If that’s the case, what’s the logic behind the Osaka switcheroo? Well, Osaka folks are known for being impatient, so for them, walking up the escalator (not standing still) is the normal state of things. The walkers on the left are “normal traffic,“ and the people standing on the right are more like broken down vehicles that stay put because they can’t move. Or so I’ve heard.

It’s impossible to know with 100% certainty what’s the true reason, but just understand that on the Japanese escalator, east is left and west is right, and never the twain shall meet. Either way, it’s a common courtesy that can confuse tourists from inside and outside of Japan.

Power to the people

As mentioned in the intro, Japan runs on 50Hz in the east and 60Hz in the west. Why on earth could that be? In the late 19th century the Kanto region including Tokyo started pumping AC power using a 50Hz 3kV generator by AEG (Allgemeine Elektricitäts-Gesellschaft) of Germany, while a US-made General Electric 60Hz 2.3kV AC generator was used in the Kansai region including Osaka. And it just stayed that way, despite some dramatic events happening since then. 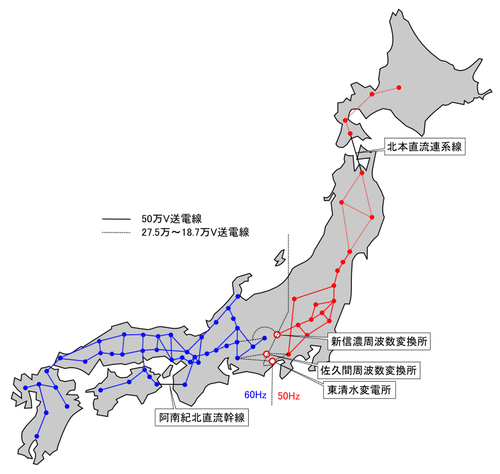 Thanks to modern electronics and DC motors, this energy rift is not as disruptive as it used to be decades ago, but even now home appliances like washing machines and refrigerators cannot cross this divide without losing efficiency or risking malfunction.

Considering how the Japanese love to standardize things, it’s amazing that this dichotomy continues to exist. In the aftermath of the quake and tsunami that hit northeastern Japan in 2011, the fact that western power could not be shared with the east did make life unnecessarily difficult.

There’s a new game in town

Japanese people have loved baseball ever since the late 19th century, and the most enduring and iconic east-west rivalry on the diamond has been between Tokyo’s Yomiuri Giants and Osaka’s Hanshin Tigers, two of the oldest clubs in Japanese professional baseball.

But more recently we’re seeing another, more in-your-face rivalry—both on and off the field.

The Fukuoka SoftBank Hawks (Fukuoka Prefecture) and Tohoku Rakuten Golden Eagles (Miyagi Prefecture) are currently duking it out for top position in Japan’s Pacific League. Hawks… Eagles… Now, is it mere coincidence that both teams are named after birds of prey? And the newer team just happens to be named after a bigger and badder bird?

Likewise, Masayoshi Son of SoftBank (and Sprint), and Hiroshi Mikitani of Rakuten, are in the news themselves—busy outdoing each other on the global business scene. If Softbank signs a USD $2 billion deal to back Grab for ride-hailing services one day, Rakuten’s CEO tweets about being Lyft’s largest shareholder the day after.

Rakuten is the largest shareholder of Lyft – Lyft partners with Amtrak for first- and last-mile trip https://t.co/JrLuMHHaD5

Both CEOs were educated in the US and are fluent in English. Perhaps owing to this, they are not shy about sharing their thoughts (unlike the virtually invisible top management of more traditional Japanese firms). One might argue that their adversarial relationship stems more from their similarities than their differences.

But dig deeper and you’ll discover another east-west side story.

If you guessed that Mr. Son is an alumnus of UC Berkeley and Mr. Mikitani hails from Harvard, you’d be correct. (Merely stating the facts, but with tongue lodged firmly in cheek.)

What it all means for Japanese localization

Do these differences between east and west mean you’ll need to localize differently when entering the Japanese market?

Good news. The Tokugawa shogunate ruled by keeping the country divided, including language. But the subsequent Meiji government standardized the language so that today, in written form at least, Japanese is the same nationwide. Spoken Japanese has lots of regional dialects that are an important part of local cultural identity, but standard Japanese is what’s taught at school, and it’s the only thing you need to worry about when trying to sell in Japan (although that in itself can be a challenge.)

When Facebook introduced the Kansai dialect as a selectable UI language, it wasn’t out of necessity, but rather for entertainment value. Anybody living in Japan who is a fan of manzai comedy might choose the Kansai dialect for their Facebook UI just for kicks: the relationship between standard Japanese (日本語) and the Kansai dialect (日本語(関西) is on a par with “English” and “English (Pirate).” Here’s a short list of the differences between the UI, maties.

If you’re thinking of including Kansai or any other local dialect in your Japanese localization, just be sure that it’s accurate. Few things can provide a bigger negative reaction than a mangled vernacular. And if you’re dealing with an official document, by all means stick to standard Japanese because using a local dialect there will come across as insulting (even to the locals). 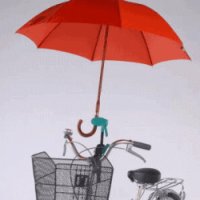 Depending on what product or service you’re trying to sell, do keep in mind that what flies in Tokyo may flop in Osaka, or vice versa. It’s not a language thing; it’s a cultural thing. For instance, this clamp that holds an umbrella upright on a bicycle sells like hotcakes in Osaka, but has no market in Tokyo—which is just as well, because there is some question as to its legality.

The catalyst that drove the Japanese automotive industry forward was the Nissan (Kanagawa Prefecture) vs. Toyota (Aichi Prefecture) east-west rivalry. For those who remember the Beta vs. VHS video format wars, it’s interesting to know that behind the Sony versus JVC dynamic (where both are eastern, Tokyo and Kanagawa respectively), there were shadows of a proxy war involving Panasonic (HQ in Osaka) who was the majority stockholder in JVC at the time.

Nowadays the battle lines are not so easily defined, with many companies being owned by someone else. So when a good old-fashioned east-west rivalry starts brewing, it’s time to keep a keen eye on the results, and get ready to be entertained. On the baseball field, and in a variety of other fields, Rakuten vs. SoftBank seems to be hottest ticket in a never-ending saga.

(Look closely and you’ll notice some ex-major leaguers in there.)