In this series, we discuss some interesting facts about individual languages and how you can avoid mistakes when localizing into them. Today we’re looking at the land that gives us mobile phones, electronics, cars, and K-pop. Read on and discover!

Korean is spoken by about 80 million people worldwide, primarily in the Republic of Korea (South Korea) and Democratic People’s Republic of Korea (North Korea). But as localization into Korean happens largely into the South Korean variant, we’ll focus on that in this post. Many thanks to Abby Kyoungeun Kim, our Linguistic Services Manager based in South Korea, for providing most of the information in this post.

1. Say hello to the postposition

That’s right, a postposition. I did a double take when Abby said the word the first time, but she went on unruffled. (Apparently, linguists, especially Korean linguists, are all too familiar with the word.) Postpositions are very important in the Korean language as they indicate the syntax and relation between subject/object and the verb(s) within a sentence. And, the way a noun is pronounced will determine which postposition is to be used.

As you can imagine, postpositions can get very complicated in written text. The context of the word in the source language does help, but Korean translators usually prefer to put one postposition inside brackets and one outside to leave the choice up to the reader when translators are not able to determine which one may be correct.

Korean has seven levels of speech formality: two for higher levels, three for middle levels, and two for lower levels. Honorifics are used to differentiate between formal and informal speech based on the level of familiarity between the speaker and the listener. For Korean localization projects, the client and the translator need to agree on which speech level and honorific are to be used.

The higher the formality, the more verbose the text tends to be. In localization, it’s usually the formal or casual-formal level that’s used.

How does this play out when figuring out which level is right for your buyer personas? A cola company may be primarily targeting younger people, so it needs to adopt a lower speech level. However, a healthcare product for older people needs to have a higher level. Where it gets complicated is when a product is trying to target multiple age demographics. Such products are usually complex to localize and it’s best to adopt a formal level in such cases.

Most source content for Korean localization is in American English, and the translated text tends to be longer than the original, especially for marketing content. American English can be very casual, but the Korean translation will need to be more formal, and hence will need more words. It’s not that colloquialisms and informal language don’t exist in Korean; they’re just not recommended in mass communication. However, the trend to use a more friendly and informal voice in Korean is slowly emerging. 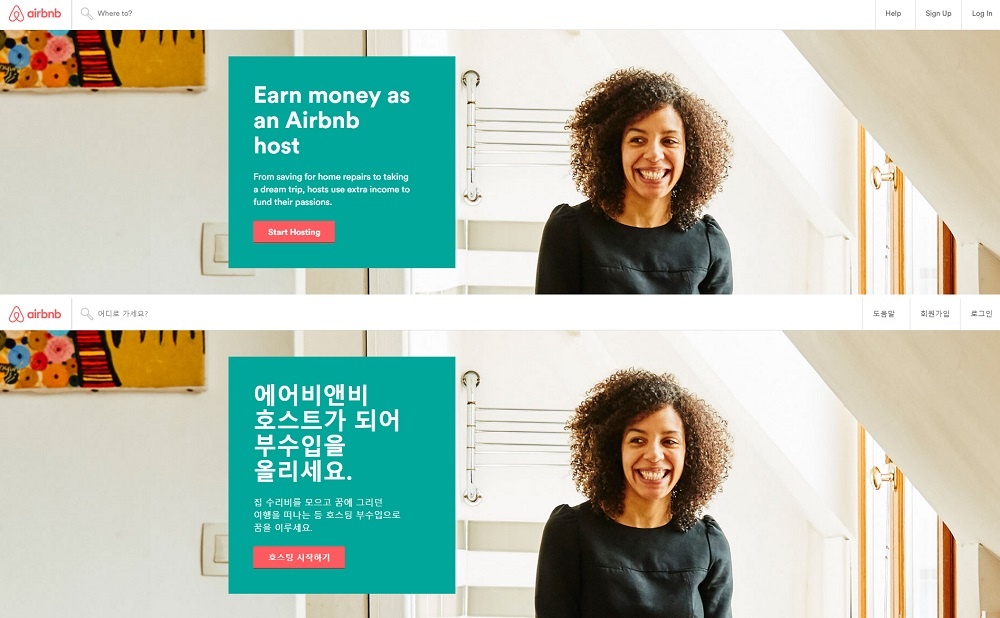 You may need to allow for more space with Korean. Credits: https://ko.airbnb.com

There also used to be different spoken formality levels for men and women, with the more formal level being used for men, and an informal level for women. But, thanks to increasing gender equality in South Korea, this distinction is no longer necessary.

It’s actually easier to translate from Japanese into Korean because of the similarities in speech levels and grammar structures. In fact, even word-to-word translation is possible. Not so with Chinese, though, as it neither has as many speech levels, nor is it as strict about usage.

On a side note, Abby explained to me that clients would sometimes complain about the omission of the exclamation mark. They would point it out in the source content and ask why the Korean translation didn’t have it. The answer is this necessity to conform to the right speech level in Korean.

When writing in Korean, you can get away with using only two levels. Not so in the spoken form. The level of formality becomes especially important and rigid when speaking. Understandably, this poses problems for foreign companies trying to do multimedia campaigns in the South Korean market.

Abby’s advice is to “be as general as possible, or as precise as possible.” Cryptic as that may sound, they are words of wisdom. You either have to be very sure of who your audience is, and choose an appropriate speech level accordingly, or go with a more formal tone to be on the safe side. Abby recalls a time when she was reviewing subtitles for a printer commercial. When the voice artist spoke the lines, they sounded like a Disney character! The text was way too informal for a product like printers, and could have been potentially embarrassing for the company.

The Korean script, Hangul, consists of multi-byte characters, which means that when text is translated into Korean, it will take up nearly double the space than the English characters did. Developers need to keep this in mind, especially when developing mobile apps, where the screen real estate is limited.

5. Loanwords exist but the source has changed over time

Loanwords traditionally used to come from Chinese, partly because the Korean language used the Hanzi characters (called Hanja in Korean) together with Hangul until the 1980s. Since then, thanks to rising national pride, the Korean language has decidedly walked away from Chinese as well as Japanese influences. The South Korean variant still retains loanwords from Chinese, but they are now pronounced in a distinctly Korean way. North Korea, however, fully rejected them and re-invented all of the loanwords in its own language.

With time and an increase in commerce with the Western world, the South Korean variant is now populated with many English loanwords. They are mostly transliterated rather than translated. “It helps avoid miscommunication between professionals in the fields of IT, mechanical engineering, medicine, sports, and fashion. These loanwords are so well accepted that if we try to replace them with translations, clients complain that the translation isn’t authentic enough and sounds like the North Korean variant,” Abby says.

South Korea is considered a mature localization market, which means that, among other things, people are used to being served in their own language, and that their quality expectations tend to be high. If done right, localizing into Korean gives you access to 2.29% of the world’s online purchasing power. Though this percentage is not growing fast, remember that it roughly equals the market currently being opened up by long-tail languages.

Why American English Content Should Be Adapted for the British Market
Seven Things to Consider When Localizing for China
Can Pidgin Languages Be Used for Marketing and Advertising?
Doing Business in Australia: A Case for English-English Translation