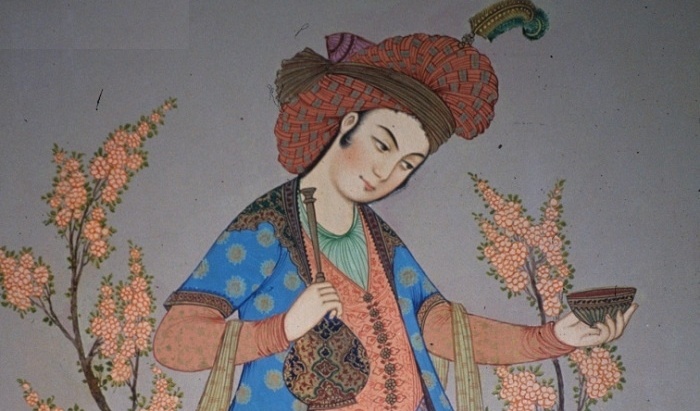 Since early last year, when partial international sanctions on Iran were lifted, the country has figured prominently among the new markets global companies plan to enter. After all, it’s one of the biggest economies in the Middle East, yet no one had much access to it for several years.

What does it take to do business in Iran? What should you be mindful of as you step into this rapidly urbanizing country?

Unclear dynamics between the US and Iran

US sanctions on Iran remain, making for a hazy business picture. For example, Apple and Google had to remove Iranian apps from their app stores. Bloomberg, however, argues that inclusion would have been a much better economic policy.

The US sanctions have made European financial institutions wary of working with Iran as well, but China recently upped the stakes by offering a $10 billion credit line to Iran. This speaks to this 80-million-strong, oil-rich country’s potential. Whether or not your company is currently working in Iran, it pays to be prepared.

So what industries are favored?

Foreign automotive companies have an edge over domestic

According to a 2015 Roland-Berger study, Iranians have a distinct preference for imported automobiles over domestic brands because of their perceived better quality (see chart below). Yet steep tariffs on imported vehicles place them on an unequal footing with Iranian ones.

But hybrid vehicles have been exempt from high tariffs, so companies such as Toyota have swiftly moved in to take advantage. Chinese companies, unaffected by the US embargo, are entering Iran and operating in partnership with local firms. 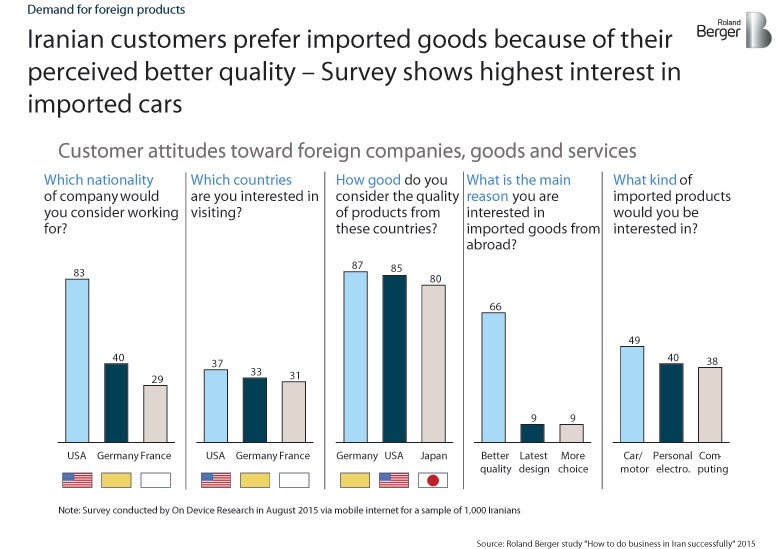 For retail, opportunities are immediately available

Traditional mom-and-pop stores dominate the Fast-Moving Consumer Goods (FMCG) sector in Iran, despite a strong demand for Western brands that remains largely unserved. Some of the difficulties of operating in this space in the country are:

It’s obvious that Iranian consumers want more choice: more than 300 shopping centers are currently being built, and foundations are being laid for Iran to welcome modern retail.

Though opportunities abound in the F&B sector, Iranian companies enjoy an edge over their international peers, thanks to taxes on imports. It’s no surprise, then, that consumers prefer to purchase less expensive brands, particularly for staples such as dairy products, baked goods, confectionery products, and oils and fats.

Still, it’s worth noting how some of the mini-verticals in this space are opening up because of a shift in customer choice. Juice is increasingly replacing carbonated drinks, thanks to the growing health and wellness trends. Juice makers should note that it is very common for Iranians to use juice in alcoholic drinks at home. Alcohol is technically illegal in Iran, though.

The demand for bottled water may see good growth too, as the Iranian government has not invested much into the country’s water quality. But keep in mind that small bottle sizes are more popular. Currently, these innovations in packaging sizes are led by only one domestic company; it produces bottled water in 1.5l, 500ml, 296ml, and 250ml sizes, while all other bottled water players only sell in 1.5ml and 500ml bottles.

Domestic dairy companies are proving hard to beat in Iran, though Danone is doing well and Nestlé has a substantial presence. In fact, domestic companies are doing so well they are actually eyeing foreign markets, especially that of Russia.

A ripening ecommerce market beckons, thanks to fashion-crazy Iranians

An estimated 39 percent of Iranians shop online at least once a month, according to TechCrunch, with around 11 percent shopping online every week. The bulk of the purchases are clothing items. Given that only about half of Iranians own a smartphone, and compared to data from the Pew Research Center estimating that only 15 percent of Americans purchase something online every week, this is a hot market.

Homegrown, lucrative ecommerce startups, such as Modiseh and Digikala, have been catering to this spike in fashion demand, which has a lot to do with Iranians’ fine sense of style. For instance, today, many of Iran’s most popular style icons are rejecting Eurocentric standards and boldly creating their own niche. Many Iranian women are launching their own fashion startups and showcasing their original designs on Instagram, which, unlike Facebook, is not banned.

Iranian fashionistas know how to work with or around Islamic law, which requires women to wear modest outerwear and cover their hair. It’s common for luxury consumers in Iran to buy clothes from Western designers and then modify them to make the apparel more modest. Some designers have even created art out of what they have: they turn the loose-fitting, long overcoats—called chadors—into fashionable outerwear.

In the early 2000s, the localization effort for Persian was quite limited and usually suffered from various issues (often caused by trying to use Arabic-supporting tools for Persian localization). As a result, people avoided using localized products. This changed at around the turn of the decade, when companies such as Google, Microsoft, and Nokia began larger-scale localization efforts into Persian, leading to remarkable improvements in glossaries, style guides, tools, and general know-how.

Learn more: Farsi or Persian? 5 Things to Know about the Language That Unlocks Iran’s Market Potential

These days, Iranians favor localized products, webpages, and software. Even young users who are fluent in English have a clear preference for using localized versions.

Iran, the 17th-largest economy in the world, has a lot going for it. But foreign investors must be prepared to navigate the complex intersection of regulatory requirements, market conditions, buying preferences, and the country’s political and cultural landscape.