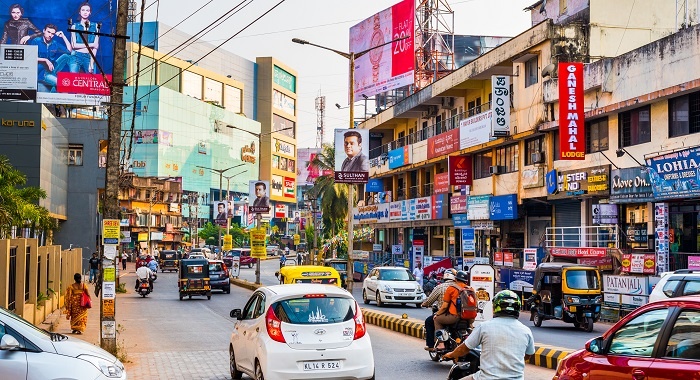 A couple of months ago, I wrote about how companies are ignoring translation in India and thereby not tapping a substantial potential of the market — a market that continues to be wooed by international market leaders as well as one in which domestic startups regularly attract investment from Silicon Valley. A reader then remarked that the companies must surely know what their customers want. And, if by their market research, they found it wasn’t necessary to serve in the local language, they wouldn’t.

It got me thinking if that were indeed so. Was it true that localization was not necessary in this country bubbling over with languages? Are Indian companies not translating because no one in India wants products and services in their own language? Or is it a case of undocumented, and hence denied and ignored, language needs?

The status quo on translation and localization in India

It was perhaps towards the end of the ‘90s that multilingual advertisements on TV first started making their appearance in India. The cringe-worthy literal translations of tag lines from Hindi or English to the local language would make us laugh. Since then, marketing in India has been in full-on vernacular, though there are still no promises that we’d see less of the cringe-worthy stuff, as ad agencies are yet to latch on to the idea of marketing localization and transcreation rather than mere translation.

We now have print, radio, and television advertisements in local languages. We have multilingual customer care centers. We have…well, it kind of stops there. It’s amazing how translation and localization in India have simply stopped at the marketing stage. By not translating their websites, product information, fine print, forms, user guides, and other content that they create, they are in fact not delivering on the message that their multilingual ads promise.

Post-sale, the Indian consumer pretty much enters a monolingual or at the most bilingual country, with Hindi usually being the second language. Doesn’t sound fair or even like a complete user experience, does it? Well, guess what? Indian consumers think so too, and are becoming quite vociferous in their demand for language support.

We interviewed people from three groups lobbying for Kannada, Marathi, and Tamil. They drew our attention to some localization developments across various sectors, brought about by popular demand and the work of these organizations.

Kannada language support at the ATMs and on the IVR of HDFC Bank, one of the largest private banks in India, was brought about by relentless tweets and requests by Kannada Grahakara Koota (Kannada Consumers’ Forum) (KGK), a Bengaluru-based organization. It tweets as @KannadaGrahaka and runs a Facebook page titled Angadiyalli Kannada Nudi (Kannada at the store). 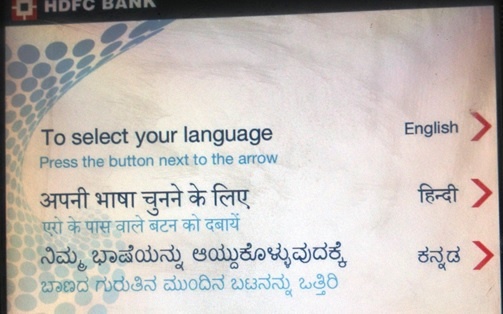 HDFC Bank now provides Kannada support on its ATMs, thanks to popular demand and lobbying by citizen groups. Kannada is the third language from top.

Back in 2012, when I had worked on a study on the language friendliness of Indian banks, we found that eight of the top 10 banks did offer multilingual options on their ATM machines. So, the fact that this still had to be demanded at HDFC Bank was somewhat of a surprise.

The group also persuaded Citibank to issue forms in Kannada at its branches in Karnataka. Our second interviewee, Vishal Navekar, coordinator of Marathi Bola Chaluval (Speak Marathi Movement), told us that his organization regularly writes to regional heads of banks in Maharashtra and asks for forms and other documents in Marathi. Navekar reports a mixed response so far. Usually, the decision-making person does see their point and notifies branches to support Marathi, but sometimes it doesn’t get executed at the district level. Navekar’s group then takes the issue up with the local branches and tries to ensure compliance.

Local language documentation in banks is available to an extent, especially with public sector banks, but it’s not uniformly available since it isn’t required by law.

The Securities and Exchange Board of India recently directed that all documentation, disclosures and other communication and content on securities must be made available in 15 Indian languages. It’s about time for the Reserve Bank of India, the country’s central bank, to mandate similarly.

Chintu TV, a kids’ channel, is the only one in its genre to broadcast in Kannada. However, it was not available from most major DTH operators in Karnataka. KGK got an online petition going which more than 600 people signed, and Chintu (meaning little fellow) is now available widely. My daughter is a thankful viewer!

Kannada music lovers were also successful in getting Spotify to host over 1,000 Kannada songs where previously none existed, despite Spotify still being officially unavailable in India.

Inflight announcements on British Airways flights are now being made in Kannada. So are the announcements in Heathrow for flights to and from Bengaluru, again thanks to KGK.

Amazon went from “Try Toh Kar” (Hindi for “At least try it”) to “Namma Angadi” (Kannada for “Our store”) after scores of tweets and comments on its Facebook page made it see that transliterated Hindi ads and tag lines just wouldn’t cut it in Bengaluru. It also launched an exclusive Kannada Store. The development at Amazon is in line with what execs from online advertising companies have observed happening: display-only channels like banners and ecommerce will be among the first to be localized.

KGK had run a Twitter campaign with the hashtag #ServeInMyLanguage on World Consumer Day on March 15th this year. Jayanth Siddmallappa, group convener, says the campaign caught the attention of the Karnataka state government as well as of people from across India.

There have been more similar developments than those we list here. For instance, Kannada is now part of Samsung’s UI support, as well as crowdsourced translation projects on WhatsApp. Himakiran Anugula of the Promote Linguistic Equality group told us about how his group has been campaigning for courts in Tamil Nadu to use Tamil in all communication.

Moral of the story?

India is changing rapidly, and like all emerging economies, there’s a strong sense of identity and pride that’s coming to the foreground. Take this widely popular ad released a couple of months ago by home-grown handset maker Micromax. It associates a pride in Indian languages with being cool and youth-friendly while laughing at “Angrezipanti,” which loosely translates to Anglophilia.

In countries as complex and competitive as India, don’t let language trip you up. It’s a relatively easy part of the puzzle, though it will involve some major investment and effort initially.

Yes, many Indians are proficient in English. Actual numbers vary, but we can put it at about 10 to 30 percent of the population, most of whom live in cities. Not all of them have the same level of proficiency, though. As growth in first-tier cities slows down, you will need to understand the rural and suburban consumer better and cater accordingly.

Nokia did this long ago, even when first-tier cities were growing rapidly. Not only did it translate, but it also localized its products. Mobile phones with flashlights, dust-resistant handsets, Indian-language keypads — Indians loved it all and to this day Nokia brings back warm memories.

Google, Facebook, and Microsoft have all eagerly added Indian languages, and are forever trying to increase their coverage. What have they got in return? Well, I can’t speak for their numbers pre- and post-localization, but it would be hard to find an average Indian consumer who hasn’t heard of and uses their products. Neither does anyone really think of them as being non-Indian. Localization has played a huge part in earning such goodwill and loyalty.

Hindi is barely spoken in many parts of the country. In fact, you may invite a backlash if you insist on a Hindi-only approach. It would be a no-brainer for a marketer from the EU to see that local marketing is dead without local language, yet companies think that translation in India starts and ends with Hindi. They profess doubts about the purchasing power of the non-English, non-Hindi Indian buyer, but for the most part, these doubts are self-fulfilling prophecies.

No need to be overwhelmed…

Localizing for India may seem daunting. However, it doesn’t have to be, as long as you adopt a carefully crafted strategy. First, determine the states or regions in which your product has already earned itself a huge market or is aiming to. Next, choose the dominant languages of the region. For instance, Hindi serves 10 populous states in the north, or up to 422 million people. In the south, however, there are four dominant languages: Tamil, Kannada, Telugu, and Malayalam, which together are spoken by about 252 million people. Some more languages that will bolster your reach are Marathi, Bengali, and Gujarati.

…But you do need to prepare fast

The conversation should be not around whether you need to localize for India, but how you can do it. For if you are stuck at the first question, you are perhaps already left behind by your competitors. There’s a lot happening in the language startup space in India to cater to the demand for local language content and other services that will make life easier for the digital Indian. Take heed of these developments as they signal the coming of a strong translation demand.

If you’re a company that has had previous experience in localization, albeit for different languages, at least you are familiar with the processes and technologies involved. However, this may not be so for many newbie Indian localizers. For them, it will be an uphill task, and everything may seem like an expense rather than an investment. Setting up a localization program requires a clear mandate from the C-level as well the requisite budget.

You will need to get your head wrapped around many other things such as centralization of localization services, procurement and technology selection. Also, there will be challenges that come with localizing for emerging markets, such as finding qualified resources. So, you had better get started fast. Remember: without the language element, initiatives like voice-enabled services, personalization, and the like will render broken experiences.

Learn from LSPs and the EU

Indian companies can take inspiration from their peers in the EU — another multilingual, multicultural society. There will obviously be many questions when they start, such as, how to handle space and formatting issues on app UIs, how many languages to fit on a label, etc. Consult language service providers (LSPs) on how to tackle these issues while at the same time being able to scale and optimize resources.

You can only capitalize so much on English tolerance in India, and even that is not a given. The localization scenario is changing fast and companies better listen before it’s too late. Imagine a situation in which you have to provide translation in Indian languages overnight!

Today it might just be a few thousand people talking about language as a consumer right. But as the examples in this post show, big-name companies have chosen to respond positively. The demand for translation is not latent, nor is it a prediction that we can wait to prove right or wrong: it’s already happening.

Everything You Need to Know About Machine Translation for Sign Language
RWS Moravians’ New Normal Under COVID-19
Top Ten Translation Myths
Doing Business in Australia: A Case for English-English Translation