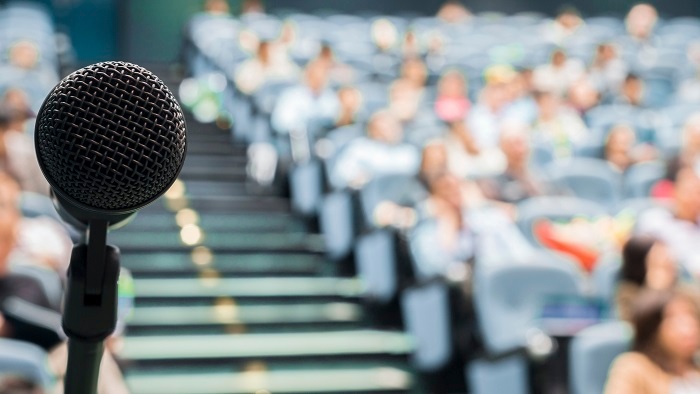 TED started as a conference for Technology, Entertainment and Design in 1984 and is now very popular for their talks that cover a wide spectrum of topics. Who hasn’t been inspired by a TED talk? So we thought, what better way to spend a summer weekend than to dig into TED talks related to translation, language and culture?

We ended up with a list of six videos from people who have experienced the beauty of language (and by extension translation). They are intensely proud of their own languages, see them as enablers rather than barriers, and have used them to positively change people’s lives.

Ultimately, we had a hard time tuning out TED — I mean, why aren’t all writing projects this fun?

Patricia Ryan spent nearly three decades teaching English in the Gulf. She has watched the rapid ascension of English to global dominance up close, and poses some very intriguing questions. How is it that people who speak other languages have to prove their fluency in English so that they can enter institutes of higher education in the US and the UK? Exactly when did not knowing English come to be correlated with a lower level of intelligence?

Suzanne Talhouk’s speech is much in the same vein as Ryan’s. In her talk in Arabic, she argues that our identities are closely intertwined with the language we speak, and questions whether speaking English amounts to being modern, and vice-versa. No language is superior or inferior, she says. At the same time, there is also no reason for us to stop borrowing words and concepts from other languages. No need for the “cultural cringe”. Point taken.

Steven Schwaitzberg, a surgeon, is passionate about teaching minimally invasive surgery to surgeons from all over the world. Of course, he runs up against the language problem. The solution? A universal translator, though in this case what he actually means is a translator and interpreter rolled into one.

Has the Internet helped to make us more aware of other cultures and languages? Is the World Wide Web indeed wide? Ethan Zuckerman, blogger, technologist, and founder of Global Voices, says that we are continuing to live in our own worlds, despite the fact that our common space, the Internet, can give us the opportunity to be multicultural and multilingual. Translation of news, he says, will serve to make us a global society and find solutions to global problems.

This is a truly wonderful talk and something that immediately strikes a chord with all translators, interpreters, and localization professionals. “All experience is local,” Taiye Selasi realizes one day after having wondered for years how she can be “from” this or that country when all of her experiences relate to individual cities within those countries. Our experience working with languages has taught us something similar: that you need to translate for locales rather than for countries. A country may have more than one language; a language may have more than one country.

What’s a post on language without a mention of technology? Oscar Schwartz poses the question: can computers write poetry, perhaps the most abstract of human endeavors? He demonstrates to us that computers necessarily mirror and “learn” what we want them to learn. So, the question regarding artificial intelligence shouldn’t actually be if computers can learn, but rather what do we want them to learn, and which aspects of human intelligence do we need them to mirror.

We added this video after a dear colleague suggested it in the comments below. Not sure how we could have missed it! We would love for this clip to go as viral as possible. Veteran interpreters Barry Olsen, Laura Burian, and Miguel Garcia take pains to explain the difference between translation and interpretation and why the difference is important to understand. Also, a must-watch for anyone who thinks any bilingual can interpret.