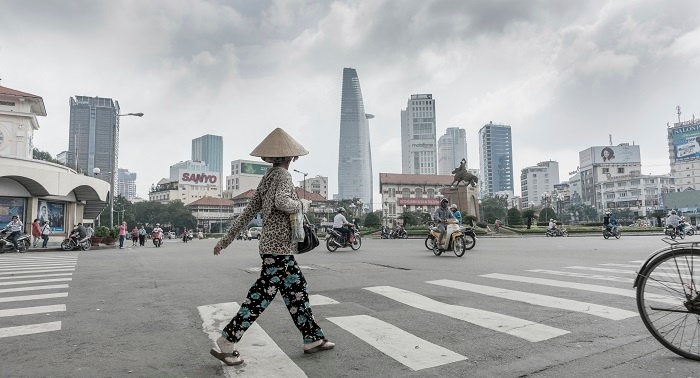 This is the first in our blog series of mini marketing guides for different countries. In this series, we’ll explore a variety of market conditions related to demographic profile, industries or companies that are doing well (or not), consumer preferences and how they affect localization, and more. Today, we’re looking at Vietnam.

Vietnam only opened up its economy about a decade ago by joining the Word Trade Organization, after the liberalizing reforms in the 1980’s and 1990’s. And yet, today its per capita income is higher than India’s. Foreign direct investment reached $11.3 billion in the first half of 2016, up by 105% from the same period last year. This is driven in part by changes in the global trade environment, such as the Trans-Pacific Partnership and the EU-Vietnam free trade agreement.

With a population upwards of 94 million or about twice that of Spain, the Vietnamese are like consumers in any emerging economy: aspiring for products and services to make their lives better and willing to spend on items such as education for their children, or consumables that perhaps they didn’t have access to before.

More than 60% of the population is rural, with Ho Chi Minh City in the south and Hanoi in the north accounting for most of the purchasing power. No wonder they are sensitive to price; but what is perhaps lesser known is that they are also beginning to be quality conscious.

We also found that about half of the world’s top 100 brands offer the Vietnamese language on their websites. This tells us about the importance they accord to the Vietnamese market. What else should you know to establish your company in Vietnam? What are your local and international peers doing to up their game?

With more than 130 million phones, of which about 32 million are smartphones, Vietnam’s app economy is scorching hot. And never mind the slow Internet connectivity: Google Play recorded the fastest year-on-year percentage growth in downloads in Vietnam last year.

Given the country’s strong gaming culture, half of the downloads were game apps. The country has a strong appetite for local game publishers, with ZingPlay ranking in the top 10 Google Play games by downloads in Q1 2016. Further, three of the top 10 games by combined Google Play and iOS App Store revenue in Vietnam during Q1 2016 were from local publishers. Flappy Bird, 2014’s viral smash hit, was so popular that its developer pulled it from the app store.

Indigenous publisher VNG which specializes in social, entertainment, and game apps leveraged local knowledge for a string of successes, including card and casino games ZingPlay-Tiếnlên and ZingPlayTáLả. It also owns Vietnam’s most-downloaded messaging app, Zalo, and it will be interesting to see if VNG will attempt the full platform route on messaging, as overseas equivalents such as Tencent have.

Clearly, local publishers know their market very well and present tough competition for global apps. This is also evidenced in the battle of the ride-sharing apps. Grab, founded in Malaysia, is a strong competitor to Uber in Vietnam, and holds the top position among ride-sharing apps in the country by combined iOS App Store and Google Play downloads. Product localization has been key to its success: it offers motorbike services, because they are the quickest and cheapest way for locals to get around, as well as the option to pay by cash.

Uber faces stiff resistance from local taxi associations, and though it spends a lot on supporting drivers and promotions, this may prove to be an unsustainable business strategy after its China experience. 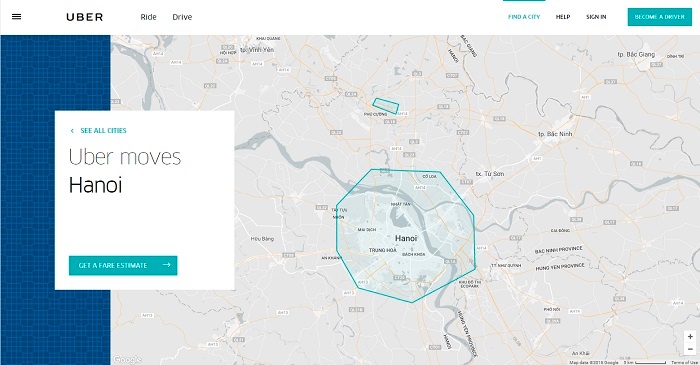 When it comes to m-commerce, local apps are again competing with regional peers. Brick-and-mortar electronics retailer Gioi Di Dong led the category in downloads in 2015, and other local apps including ChoTot.vn (customer-to-customer [C2C] marketplace) and Sendo (e-commerce retailer) performed strongly. However, these apps face strong competition from large regional players, including Lazada and Shopee (C2C marketplace).

Digital Vietnamese are uber-cool despite censorship

In keeping with emerging market trends, most smartphone users in Vietnam access the Internet solely through their devices. Among social media platforms, Facebook dominates. It’s quite common in Vietnam to accept Facebook requests from total strangers, making the platform indispensable for social networking in the truest sense. Facebook also leads in online advertising revenue in the country, with $150 million over Google’s $100 million.

Keeping censorship laws in mind, marketers had better steer clear of controversial topics related to social and political issues. Given that most online searches are more often than not related to movies, music, and celebrities, marketers should find a way to latch on to popular local trends instead.

Payment methods and strong branding are key to e-commerce success

Vietnam’s e-retailers recorded $4 billion in sales last year, and Google Play’s Shopping category data shows 200% year-on-year growth. However, there may be a slowdown in growth in 2016, partly because the country is entering a more stable developing period.

A survey by the e-commerce department of the country’s trade ministry showed that many consumers were not confident about the products’ quality, nor were comfortable with the online payment procedure. More than 80 percent of online shopping transactions still paid with cash on delivery.

To win consumer confidence, online retailers need to promote their platforms with big marketing campaigns and invest heavily in warehouse facilities. This is where foreign companies could have the upper hand.

Big e-commerce players like Lazada offer online payments by instalments. Mobile World JSC has a flexible payment method that allows consumers to be verified for instalment plans with just a telephone call, rather than having to go to the physical store to submit various papers and wait.

Western companies are welcome; not so much Chinese

China gets a low ranking among Asian leaders from the Vietnamese. Vietnam can’t really escape the influence of its giant neighbor, but a rising quality consciousness is making the country a more welcome market for Korean, Japanese, and Western brands. Take for instance Hyundai trucks, which are costlier than Chinese ones and yet are doing well in Vietnam because of their better quality — despite price being the single most important factor for Vietnamese truck buyers.

Of course, there is still a market in Vietnam for lower-cost Chinese goods. Yet, it’s notable that the country is also working up an appetite for genuine, premium products. It denotes a significant shift from the country’s socialist past when the West was generally seen as a corrupting influence and other communist nations were preferred.

Foreign coffee chains have much to be wary about

The Vietnamese coffee chain market is set to grow at 15 to 18 percent. This is a hard-to-ignore market for foreign brands, yet is proving challenging for them to dominate. 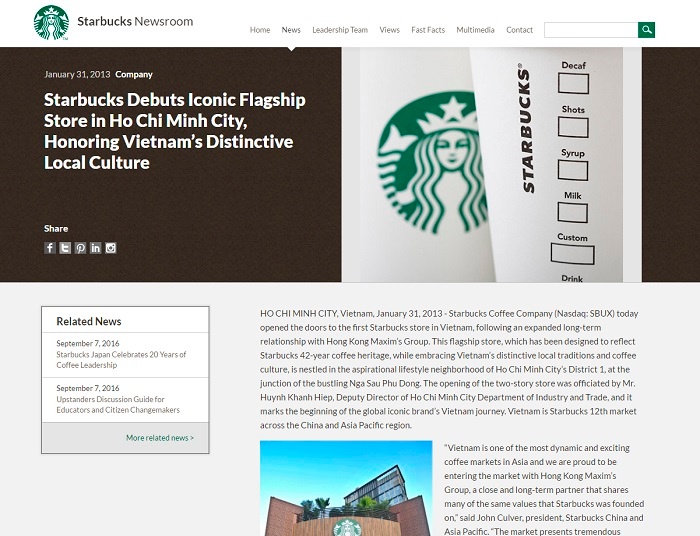 Cà phê: Starbucks opened its first store in Vietnam back in 2013. Source: www.starbucks.com

The Vietnamese know their coffee and insist it be done just right: strong and thick with a full body. They’re proud of their long coffee history and have an entrenched café culture: they enjoy coffee at a very slow pace, sitting outside and having conversations with others. Though the Vietnamese have welcomed foreign coffee chains such as Starbucks, indigenous brands are putting up a tough fight based on price, catering to local taste, and ubiquitous availability.

Motorbikes are the most popular means of transportation in Vietnam, with about 45 million registered motorbikes ruling the roads. The country remains among the largest motorbike markets by sales in the world, after China, India, and Indonesia, and even BMW had to take cognizance of this fact by introducing bikes.

However, Vietnam’s automobile sales posted a record growth of 55 percent last year and are expected to continue to grow this year, albeit at a lower rate. 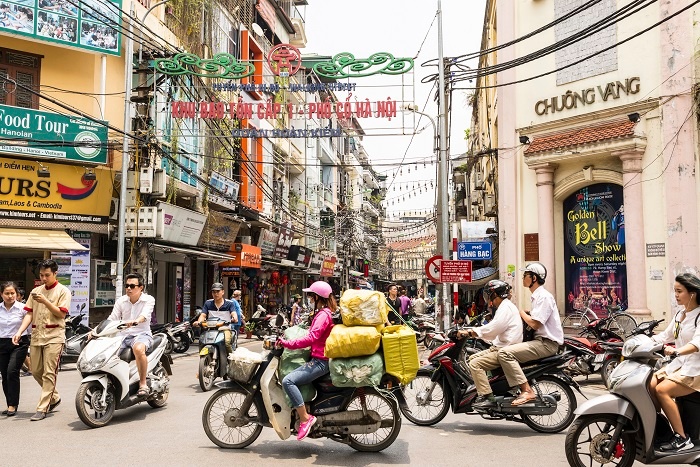 Nuances of the luxury market

According to Nguyen Thuy Linh, managing editor of Elle Vietnam, Hanoians are more likely to spend on luxury products, while Saigonese (residents of Ho Chi Minh City) prefer the latest trends and easy-to-wear pieces. “Hanoi has four seasons, so people there tend to be more well-dressed. Ho Chi Minh has only two seasons, dry and wet but hot all-year-long, so people prefer light materials, simple cuts, more vibrant items — no coats or boots,” she explains.

Vietnam’s fashion retail top tier is occupied by a handful of powerful operators, meaning that international brands are rather limited in their choice of local partners. Many observers feel this has restricted the country’s fashion market from fully flourishing. There are also other factors such as low brand awareness.

Yet it is a market with potential, and high-end fashion companies will need to continue selling to the ultra-wealthy while simultaneously investing in media campaigns to educate larger audiences. Mid-market fashion companies, though, could benefit from exploring the market outside of the two major cities, too. They could work especially well in Da Nang and in beach cities like Nha Trang and Vung Tau.

The game is on

With increases in foreign investment and consumption patterns, the Vietnamese will grow to be more discerning in the products and services they choose to buy. Local players have the advantage of knowing their customer base intimately, while global companies will have to learn this from scratch. However, international brands will be able to take advantage of the increased brand awareness of the Vietnamese consumer. All of this research would certainly be worth their effort.