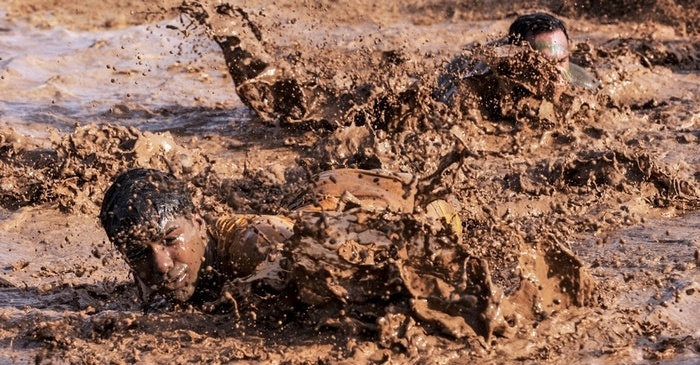 Have you ever wanted to race to conquer obstacles involving tunnels, 20-foot walls, nets, fire, ice, electricity, and mud? You can do just that in a Tough Mudder event. The Tough Mudder challenges are maybe a bit sadistic—and gleefully so as you might judge from the passion of the participants—but people sign up in droves. For example, there’s an obstacle called the Augustus Gloop in which competitors climb up a plastic shaft through cascading water. Electroshock Therapy—probably the event’s signature challenge—has participants running through a gauntlet of dangling electric wires. (The rest of us are fascinated, but we will stay in our armchairs, thank you very much.)

Described as a cross between Burning Man and Iron Man, the Tough Mudder brand has a die-hard, cult-like following. And a big one: 3 million people in 11 countries have completed their races. (And Tough Mudder has made $100 million doing it.)

It’s a passionate community. Almost obsessive. And that massive community is what Tough Mudder has purposefully developed, and how they plan to further expand their brand. Clearly, it’s working.

But how have they done it? Let’s look at seven ways in which Tough Mudder has built their global community—a “tribe” as founder and CEO Will Dean calls it—that other consumer brands could learn from.

Their target market—21- to 30-year-olds—are overwhelmingly online, and Tough Mudder has tapped into that.

For example, Will Dean found participants for the first Tough Mudder in 2010 via Facebook ads. Tens of thousands of people stream each race on Facebook Live and thousands more watch on Periscope, Twitch, and Snapchat. And people post photos online—finishers get proof of themselves sloshing through mud or plunging into ice, perfect for profile pics that will impress and inspire their friends.

Tough Mudder runs bootcamps—like CrossFit, but arguably even more gnarly. These are local community events where the tribe comes together to interact and build relationships, and where future tribe members are informally recruited.

The Dubai race debut last December didn’t feature beer because Saudi Arabians are largely Muslim. Also, the obstacles were adapted for the region: i.e., no mud because it’s the desert. As extreme athletic events are not as well known or popular in other countries, Tough Mudder is starting more slowly in those locales: they’ve created shorter races, such as in China where they offer a more achievable 5K race.

4. Create a passionate cause

As described by FastCompany magazine here, every modern brand that inspires intense passion—from Apple to Nike to SoulCycle to WeWork—has a spiritual underpinning, filling community members’ lives with rituals, beliefs, and shared purpose. Like these other brands, Tough Mudder has developed common goals between their contestants. In this case it’s to finish those grueling courses.

To bring in spectators (fans and possible participants), Tough Mudder has built a relationship with American TV channel CBS, who produces and covers the events, in addition to the live streaming online.

More products equal more customers. Tough Mudder realized their core event—the 13-miler—didn’t appeal to all potential participants. They created shorter runs such as the 5K Half Mudder for China and for children, and a Tougher Mudder for people who are even more die-hard. (The Toughest Mudder is 24 hours of pain and insanity.)

On top of that, there’s a growing apparel line in collaboration with Under Armour. And they’ve got those local bootcamps.

Tough Mudder’s values are clear: teamwork, camaraderie, and (very) hard work—values that appeal to their target community. Shared values bring communities together in a fundamental and visceral way; they run deep, define who you are, and inspire passion. Also, these ideals differentiate them from the competition: as described in The Telegraph, Tough Mudder’s fun principles have helped them outsmart rivals like Spartan Race.

Tough Mudder is an international success and a phenomenon rooted in community. The Tough Mudder brand, in fact, wouldn’t work without community: there’s just no way to scale a slippery 20-foot wall without other racers shoving you over it. And 20,000 people have gotten a Tough Mudder tattoo. If that’s not a commitment to a community, then what is?

Everything You Need to Know About Machine Translation for Sign Language
RWS Moravians’ New Normal Under COVID-19
Top Ten Translation Myths
Doing Business in Australia: A Case for English-English Translation