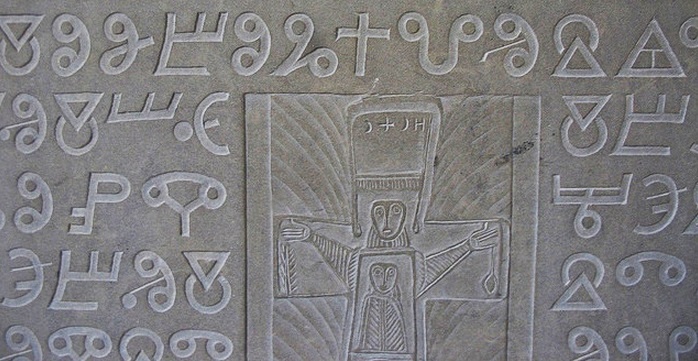 Languages are enormously complex, and scripts, the written forms of language, are both a method of communication as well as an art form. Despite our always-connected world, some scripts are becoming extinct. Tim Brookes aims to change that.

As founder of the Endangered Alphabets Project, Tim’s mission is to uncover languages on the brink of extinction, connect with their few remaining scribes, and educate people on these scripts. Michael Stevens and Renato Beninatto of the Globally Speaking podcast chatted with him about the evolution and extinction of rare scripts.

The origins of writing systems

While there are nearly 7,000 languages in the world, combined they use only 120 scripts. Some languages do not have a written equivalent at all, such as many African and Native American tribal languages—the survival of these languages depends on oral tradition alone.

One dominant theory as to why languages develop scripts is because of commerce. When groups of people began doing business with each other, they started keeping records. As merchants traveled, their scripts became adopted by the languages of the cultures they interacted with.

Of course, religion also played a part in script dissemination. As some of the most educated folk around, clergy often reproduced texts and manuscripts for distribution. As groups spread their religions, they handed out their materials, prompting other cultures to learn to read and write the script.

The basic elements of writing systems

When there is no one left to read a script, its main purpose—to communicate—becomes lost. People can no longer pronounce or understand it. (They can only admire it, and this is how it becomes art.)

Scripts and languages are as much a part of a culture as clothes, music, traditions, and food. Tim warns that when people no longer understand how to read a language, so much is lost: the history of ideas and the aesthetic of that culture, to say the least. Will future scholars be able to decipher the content they may find in uncovered documents, stone tablets, monuments or carvings, and will we be able to continue to learn about peoples and their cultures?

Why some scripts are dying

There are various reasons why a script would die. When a population dwindles, so does usage of their language and script.

Another cause of vanishing scripts is governments imposing official national languages as a means to unify their people or do more commerce with the rest of the world. When Indonesia formed, Tim explained, it made Indonesian the official language to unite its 17,500 islands. As schools had to teach children Indonesian, the native languages of the various islands diminished.

And, just as religion spread languages and scripts, it killed some too. Thanks to the Roman Empire’s massive territorial reach, excellent road systems, and Latin and Greek as official languages of the government and military, Christians produced their literature and traveled the region preaching their beliefs using only these two languages.

Have your kids stopped learning cursive writing in school? Yeah, that’s another example of an evolving disuse of a script. The digital era of typing, swiping, and tapping has made this form of writing unnecessary. No more hand-written thank-you notes: even Grandma has email and Skype.

Yet others are created or revived

There is hope. Hebrew, for example, fell to the wayside in the 3rd century BC, was revived as a spoken language in the 19th and 20th centuries, and is now one of Israel’s official languages (source: Wikipedia). In countries such as Ireland and Croatia, they are digging up forgotten languages as a means of reconnecting with their histories or identities. Ireland’s Ogham language is being used in tourist materials, and Croatia brought back the Glagolitic script after regaining their independence in the 1990s as a symbol of their antiquity and pre-Yugoslavia prestige.

In areas of West Africa, Tim says that individuals have begun creating scripts for their own languages after having an epiphany that, basically, “everyone has a script; you should too.” This shift could connect these otherwise remote groups to the greater world, while at the same time further crafting their unique identities.

Children are the future

As with everything, children need to learn the scripts of their elders and cultures to prevent the writing systems from becoming extinct. An excellent way to teach them is through games. We’ve all grown up playing games that helped us learn our native language: card games for children help them match sounds or images to written words, and games like Boggle and Scrabble get you thinking about various letter and sound combinations. These are the kinds of things that, unconsciously, teach us spelling, pronunciation, and letter combination recognition.

Tim’s Endangered Alphabets Project hopes to do just that in populations around the world whose scripts are dwindling. His Kickstarter campaign ended, but you can follow him and donate to his cause at http://endangeredalphabets.com. Hear the entire fascinating podcast here.