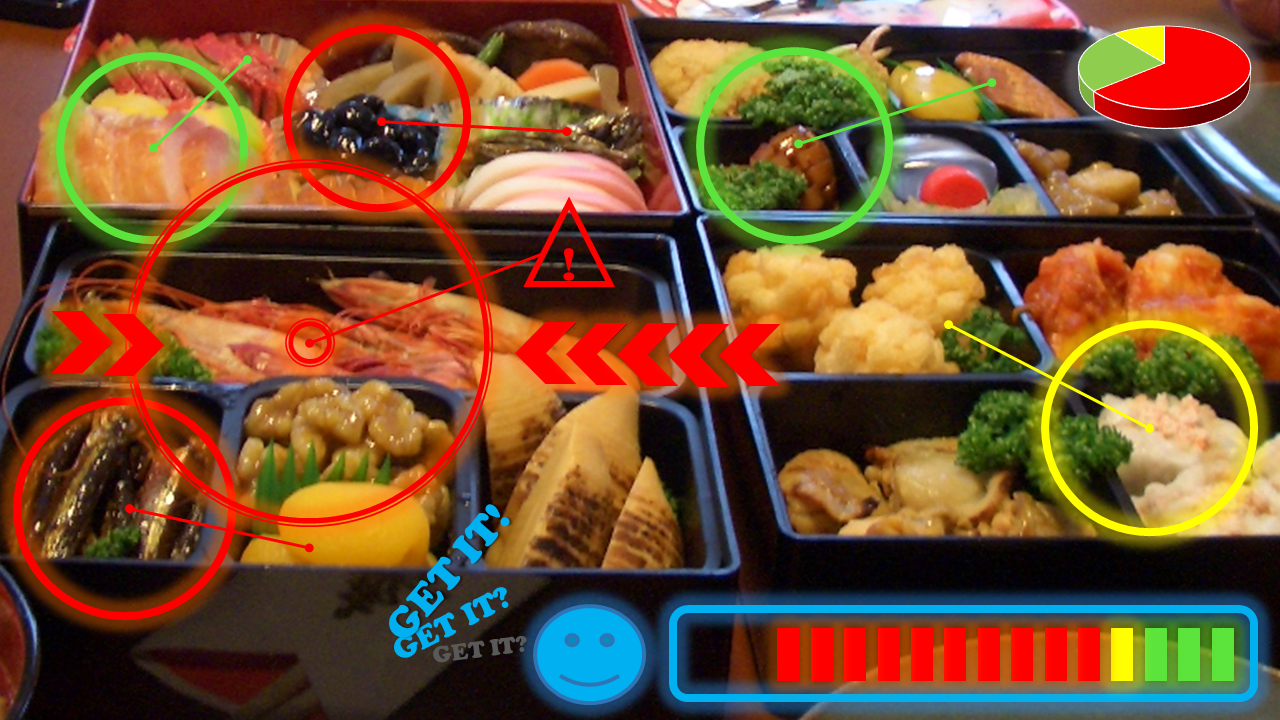 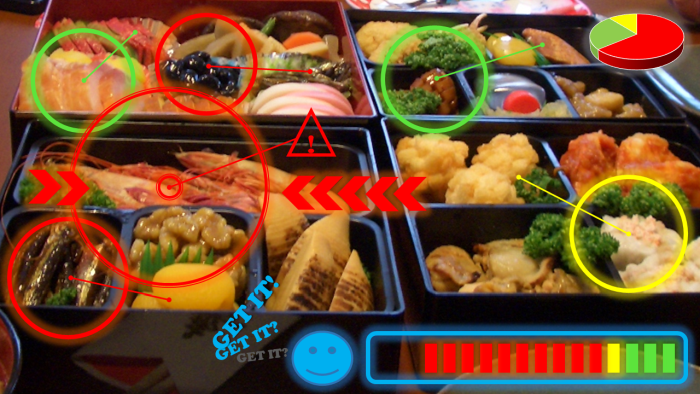 It’s the year 2020 and you’re in Japan. This is your first meal of the year, and your AR vision suddenly lights up with a cornucopia of warning displays — they’re pun alerts! It’s time to discover and savor the punny side of New Year’s in the land of the rising sun.

Of course, in reality this is not the year 2020 and it’s doubtful that AR goggles will ever be equipped with a pun detection system. Will you ever be in Japan? Only time will tell — but if you read on, we’ll take you on a virtual gameworld tour of Japan’s superstitious delicacies. If you have a yen for puns, you might even give osechi ryouri (御節料理) a try in real life sometime (like next year).

Puns are an integral part of life in Japan, from the punch lines (ochi, 落ち) of traditional rakugo (落語) storytelling, to the oyaji gyagu (オヤジギャグ) — or literally “dad jokes” — that middle-aged males often use as forms of communication, much to the chagrin of younger generations in the home and at the office. So it’s not like the Japanese people turn punny all of a sudden at the year’s dawn. It’s culture. It’s tradition.

The Japanese tradition of osechi is one of the most conspicuously charming aspects of life in Japan. The elaborately prepared and decorated foods are picturesque, and each one of them is symbolic and meant to bring good luck. And the puns are funny (except when they’re not).

In fact, osechi played a major role in Japanese food culture being recognized by UNESCO as an Intangible Cultural Heritage of Humanity. And now that another New Year’s season has come and gone in Japan, it’s time to take a look at the puns that come in the form of traditional New Year’s cuisine.

Actually, just because an item of food resides in a New Year’s ju-bako (重箱) does not automatically make it a pun (dajare, 駄洒落). There are varying degrees of guilt-by-word-association here. So let’s play a game and review the festive suspects to see which are the guilty parties and innocent bystanders.

The cast of characters

Candied sardines? Seriously? Well, as gross as they may sound, they’re not so bad… if you like your seafood sweetened. The name dates back centuries to when dried sardines were used as fertilizer in rice fields, hence the name 田 (rice paddy) and 作り (prepare). So is this a pun? Well, there’s definitely something fishy going on here, but we’ll let it slide because there’s also something disarmingly innocent about the wish for a bountiful year ahead.

In Japan, this fish changes names many times on its way from small-frydom to adulthood, and this “promotion through the ranks” makes it a lucky item for those with strong upward aspirations. Although there are regional differences in the names, it goes something like this: Mojako > Wakanago > Hamachi > Mejiro > Ooio > Suzuina > Buri. Ta-daa, your fish is complete! If it’s served as sashimi, chances are it’s still at the Hamachi stage, but if it’s teriyaki then most likely it is a slice of fully grown Buri. The name is not a pun per se, but the concept is suspiciously punny.

This ties in to the kanji character usage for this delicacy, where 海 means “ocean” and 老 means “elderly”. Not a play on words, but a play on kanji. This so-called elderly resident of the seas gets its name for being bent over like an old person, and it’s considered festive because everybody wants to live long enough to have a hunched back, right? Uh, well, maybe we can pass on the hunchback part, but it does attempt to convey a “live long and prosper” message. We’ll have to release it since we don’t have any ebidence on it and it’s not prawn to violence.

Bringer of fertility, because Kazu means “number” and Ko means “child”. But don’t the Japanese eat all sorts of fish eggs all the time? So why is it that Kazunoko manages to rule this season? Well, Kazunoko is particularly apropos for New Year’s because of its golden color which conjures up an image of riches. So it’s the go-to fish eggs if you want to be rich and have lots of kids — something Japan really needs in order to reverse its aging society problem.

Just as fruit has fertility connotations in just about any culture, so does this one. Plus, it’s the bringer of prosperity to future generations as well, because Daidai means “from generation to generation” when written as 代々using different kanji. Now we’re getting to the good stuff. This is a dajare, no doubt about it. In fact, if being a pun was a crime, this citrus would be punishable by a few generations of community service.

So here we are. The top 3. The biggest and baddest of food-embedded dad jokes so far this year! Bon appetite!

Coming in at #3 is the pundamental delicacy, Kuro-mame — bringer of health and stability, as Mame also means “health” and to “live dilligently” in addition to “beans”. Full o’ beans, yet so corny. This is not a flashy food by any means, but one should beware the deluxe version sold at department stores, where the black beans are decorated with pieces of real gold leaf.

For runner-up, our choice is Kobu. Its rather bizarre English name aside, this seaweed is considered a bringer of joy by the Japanese because of word-play associating it with 喜ぶ (yorokobu…get it?) which means “joy.” This kelp from the family Laminariaceae, species Saccharina japonica, not only features majorly during the New Year’s season but is also used regularly in Japanese cooking as a source of dashi soup stock. Very nutritional and healthy. But on the other hand, there are also outstanding warrants for Yoro (養老) meaning “happy elderly life” and Kobu (子生) meaning “birth of children”. In terms of pun guilt, this kelp is beyond help.

Last but not least, we have public enemy #1.

No relation to Mai-tai, the red sea bream is considered the bringer of celebration and festivity because the name Tai sounds like the latter part of Medetai, symbolizing an auspicious event. This punny pescado is considered to be especially festive with its head (okashira, 御頭) intact. A head definitely worth putting a bounty on. Medetai… mede-tai… -tai… Tai… you get it.

Well, the English-speaking world has its own fair share of “Lettuce celebrate!” and “Orange you glad to see me?” so maybe food puns are universal in nature. It would be interesting to find out how various languages around the world deal with puns in their own cuisine. As a former linguist, I will go on record that puns are among the most difficult texts to translate, but that’s another story.

Every New Year’s, the Japanese people have their osechi, some because they actually like the taste, but overwhelmingly because it’s tradition. Many of these morsels have endured for centuries, puns and symbolism intact. So in a way, wordplay may be one of the most effective natural preservatives known to mankind.