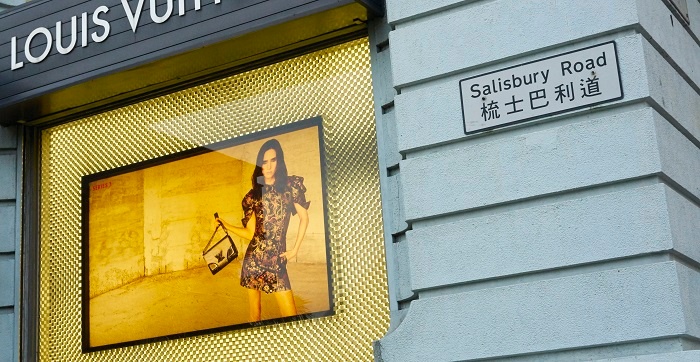 For 500 points, the question is: what is transliteration, and when would I ever use it?

How does it compare to translation?

When you look up the term on Wikipedia, the first sentence of the entry is “Not to be confused with translation.” Indeed, the terms transliteration and translation are often misconstrued:

Contrasting the two is best shown by an example: The Russian word “брюки” translates to “pants” (or “trousers” in the UK), while “bryuki”, its transliteration into Latin characters, makes no sense.

And for bonus points, Romanization is the transliteration or transcription of words in non-Latin scripts to the Latin alphabet. Whew!

It’s everywhere and you don’t realize it

OK, so other than on hockey jerseys, where would you see transliteration? Signage in countries like Russia, Japan, and Greece often include the name of a street, town, attraction, or destination in the native script and a transliterated version in Latin letters for tourists. You’ll see transliteration in passports and library search systems to assist those who can’t read the scripts, and to ensure that the databases can store the information without corrupting it.

Foreign language textbooks often use transliteration to help learners pronounce words in the new language (like in our Russian example above). English has even absorbed some transliterated words, such as tsunami and karaoke from Japanese, and vodka and cosmonaut from Russian. In order for English speakers to use and adopt these words, they had to be transliterated into Latin characters.

Transliteration is also used as an input method for some non-Latin languages when keyboards can’t support the script itself, or to display text on a device that is not configured for the native script. This is governed by a slew of transliteration conventions, including ISO Romanization charts and the fledgling Unicode Common Locale Data Repository.

Learn from the locals

Just like with translation, the local perspective can influence your approach to transliteration. What does the market prefer? What will they accept most readily?

Transliteration of your brand or product name may or may not make sense for your target market. It depends on your industry, image, target markets, and consumers. For example, if an American product is aimed at highly-educated, luxury-brand aficionados in another market, then leaving the English name in Latin characters may suffice because it is likely the audience understands English and considers products from English-speaking countries to have more of an exotic, exclusive vibe.

But, if you seek to reach a larger or more diverse (perhaps non-English speaking) audience, transliterating your product name could be your best course of action. Your brand could be more widely embraced, and might even give the impression that you’re an insider, if your target market interacts with it in their own native characters. However, your transliteration attempt could fail if you don’t do market research to determine the meaning, tone, and appropriateness of the words in the new script, like…

When it all goes wrong

You may have heard of the “bite the wax tadpole” mishap by Coca-Cola in China, but it was actually a transliteration error (and not Coke’s fault). When Coke first made its Chinese debut, shopkeepers received bottles whose labels read “Coca-Cola” in Latin letters. Concerned about selling something their customers couldn’t read, they transliterated each syllable of the product into equivalent-sounding Chinese characters. Those four characters combined meant “bite the wax tadpole”. (They put it on the shelf anyway.)

When Coca-Cola found out what the market was doing, they worked to save their brand image by crafting a new Chinese transliteration of their name that more accurately reflects their brand and the image they want to portray. The official, trademarked Chinese rendition of “Coca-Cola”, when spoken, sounds similar to the Latin version, but means “to allow the mouth to be able to rejoice”. (Had they chosen to translate the product name instead, the Chinese version would probably be closer to “fizzy soda” or something like that.) Image from the Snopes.com article linked above

Barf detergent from Iran. In Persian, the word for “snow” is برف, which transliterated into Latin characters, turns into “barf”. Not sure that’s what they intended, but at least it’s lemon-scented. 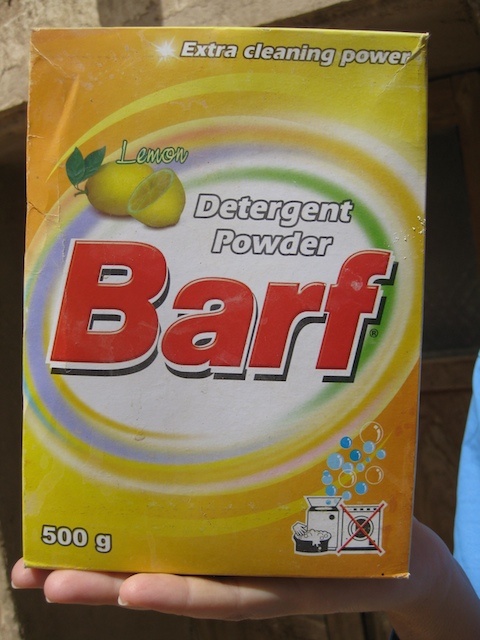 And shockingly, Burger King in China is selling PooPoo Smoothies instead of mango smoothies. It’s puzzling why they transliterated the product name into Latin characters, rather than translating it to English. 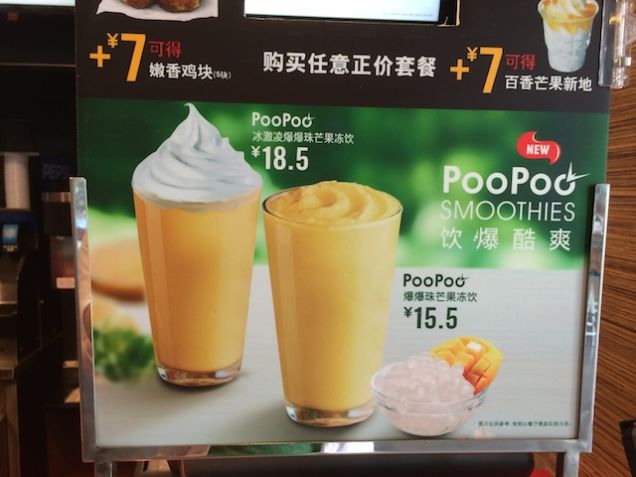 To help you decide whether to transliterate or translate your brand or product name for other markets, you have to do market research. What character set do your users prefer? What concept does the transliterated term evoke? Is there any benefit in changing the source name at all? Understanding your markets’ languages, scripts, and linguistic preferences can go a long way in helping you plan how to handle your brand concepts in your target markets.