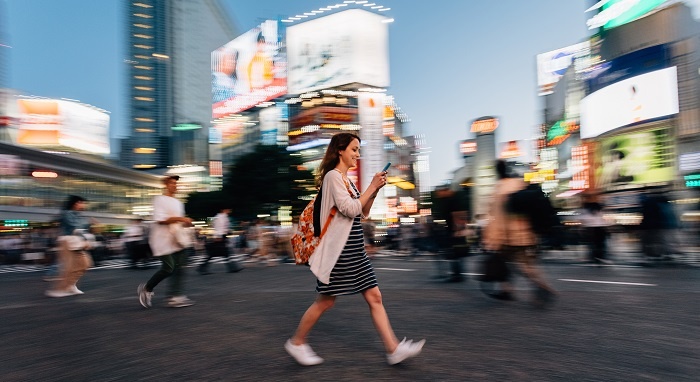 Throughout time, humanity has wanted to communicate, using whichever tool it had at its disposal. But these tools grew to be something more, as they helped us express emotions and spin memories. A messaging app — the modern communication tool — has the potential to invoke similar sentiment in its users. Like LINE does with its stickers.

LINE earned about $280 million from its sticker business alone in 2015. But stickers are not just another channel of revenue for LINE. They’re more than that: they’re what makes the app, well, stickier; they’re the growth engine for the app.

What role do stickers play in LINE’s market acquisition outside of Japan? Will they continue to be an asset as it tries to lap up non-Asian markets?

Why so popular in Japan

If you trace the history of emojis and stickers, you unsurprisingly end up in Japan. This is for a very distinct and practical reason.

Not only is typing Japanese characters cumbersome on a phone, it’s also the expectation to keep up with the various levels of formal expression in Japanese society. Direct, quick, and even abrupt may be the default way for people to communicate on messaging apps, but that’s not acceptable in Japan. So how do you turn down an invite for after-hours drinks by a colleague? Let Brown the bear do it for you.

Let Brown the bear do it for you. Credits: The New York Times

LINE stickers help Japanese users say a lot quickly and convey more than words possibly could. Not everything calls for guffawing or drawing an explicitly long face. It could be a half-smile situation, and there’s a LINE sticker for that.

Stickiness beyond the home market

LINE claimed 218 million monthly active users in mid-2016, most of whom are in its top four markets: Japan, Taiwan, Thailand, and Indonesia. Though its most important market continues to be Japan, it has made significant inroads in the other three markets. And, this is largely because of the premium that LINE places on localization. Watch the video below featuring LINE CEO Takeshi Idezawa speaking about how they localized stickers for Taiwan and Indonesia:

LINE doesn’t merely translate the stickers, but also engages with local artists and celebrities, and pulls themes from the local culture to create stickers that truly resonate with the audience. For Islamic cultures, it gleaned that a major messaging opportunity exists around Ramadan, the Muslim holy month of fasting. So it designed images of Brown the bear breaking the fast and exchanging good wishes with Cony the rabbit — two iconic characters from LINE’s sticker set.

In May 2014, the company also launched LINE Creators Market to allow anyone to design and publish stickers. They still go through an approval process, but lately LINE has relaxed the requirements. Photos are okay now, as is a set with just eight stickers. Previously, only sketches were allowed, and a set required at least 40 stickers.

What happens in non-Asian markets?

LINE has been trying to get a foothold in the United States for a couple of years now. It had to get its sticker arsenal assembled in order to win this market. It tried some known tricks, like coming up with celeb sticker ranges, but that may not be enough in the face of stiff competition from WhatsApp and Facebook Messenger, some of the top performing apps of this genre in the American market.

Would the half-smiles be lost on American users, who would perhaps prefer stickers that leave no space for misinterpretation? The cultural challenge of adapting the stickers is the same even if LINE eyes other Asian markets. In India, LINE already offers stickers in Indian languages that are also tailored to Indian themes.

LINE is very dependent on its stickers to provide a differentiating edge, and it’s aware of this dependence. Stickers that have succeeded in LINE’s top markets can be both an asset as well as a liability in new markets — unless they’re localized well. And given that it’s all visual content, localizing it is not easy.

The race to dominance in the messaging app genre is still on. It’ll be exciting to see how LINE takes up the challenge with its stickers.