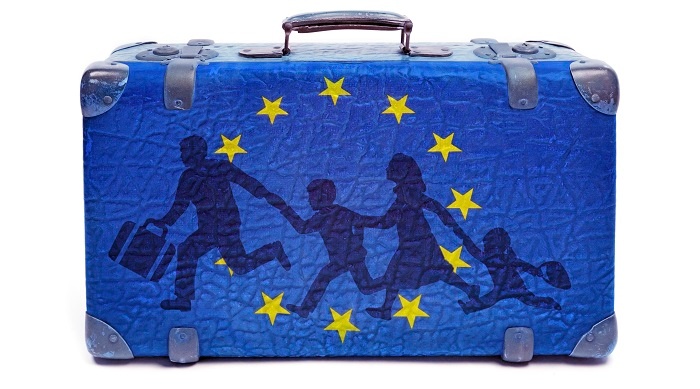 Imagine not being able to use your smartphone all day, either because there’s no coverage or because the battery has run out. And this is not just one day, but for days or weeks on end. Now imagine you’re in the middle of the Mediterranean Sea, fleeing Syria, Iraq, or Afghanistan, headed to a temporary safe haven somewhere in Europe. This is how most people from these countries start their lives, once they flee home.

But it’s not just on sea or when their phone dies out that they feel lost, isolated, or confused. The situation is not much better on terra firma or when they have a fully functioning mobile phone, because of two key missing factors: information and translation.

BBC Media recently released a report titled “Voices of Refugees,” in which refugees list information in their own language as being critical for them to find asylum and keep themselves and their families safe while on the move. We take this opportunity to not only write about BBC Media’s report, but also highlight the life-saving work being done by Translators without Borders.

The report is based on interviews with 66 refugees from Syria, Iraq, and Afghanistan in camps in Greece and 13 more interviews in Germany with those who had completed the journey. Staff of humanitarian agencies also participated.

What information is needed most?

More than a million refugees have been on the move since 2015, but it’s not just they who direly need information; it’s also the staff of humanitarian agencies and residents in host countries. However, even the right information will be deemed useless when presented in a foreign language.

When researchers asked refugees about their most critical information needs, they listed three priorities:

What helped, even if a little?

Internet connectivity and social networks provided some relief. While a meager resource, it sufficed to reassure people and keep them connected.

Refugees said they used WhatsApp and Facebook among others “[for] … information and advice. There were stories about people informing a Facebook group when they were about to … [make a crossing] and updating it when they were safely on the other side.” But social media would be helpful only if they had a good network online. Afghans usually didn’t, whereas Syrians did.

People who were connected felt less vulnerable. “Many [research] participants with mobile access explained that direct contact with other refugees who had already made the journey gave them access to a trusted network.”

This information was always in their native language, as they were talking to their friends and family. Also, the apps they used are localized, which had made them popular with the refugee population in the first place.

No translation, no information

Communication is critical in any humanitarian crisis, but the situation in refugee camps all over Europe now is distinct for four reasons, says Lali Foster, communications manager for TWB’s European Refugee Response.

Firstly, the refugee population is very diverse linguistically. They speak among them Arabic, Kurdish, Urdu, Dari, Pashto, Tigrinya, and French. Secondly, the host community and the refugees don’t speak common languages, which makes recruiting volunteers among the local population difficult. Thirdly, refugees are very mobile. This means that there is no time to build trust and information has to be given quickly. Lastly, the information that refugees need keeps changing.

All this has made translation critical but also very difficult to provide. A lack of translation presents refugees with many problems in finding their way forward and accessing health, travel, and other basic services.

How refugees think their needs can be met

Among three solutions put forth by the refugees to meet their information needs, two had to do with translation, unsurprisingly. Humanitarian agencies also agreed on the need to share information in relevant languages. They not only stressed the need for translated documents, but also for interpreters who could enable face-to-face communication in the camps. The latter would especially be important for illiterate refugees for whom a conversation or an audio message would be the only way to receive information.

“We need someone to translate for us, to communicate our needs and answer our questions.”

“Have more legal advisors in the camps (with translators) …”

Since November 2015, TWB has translated over 100,000 words of critical information into refugee languages. It has reached tens of thousands of people on their journey from the Greek islands and along the Balkan route with the help of over 100 professional and volunteer translators and interpreters.

Below are TWB’s achievements in detail:

If you’re a translator or interpreter and want to contribute with your skills, you can sign up here. There are many other ways to help. Find out more on the Translators without Borders website.