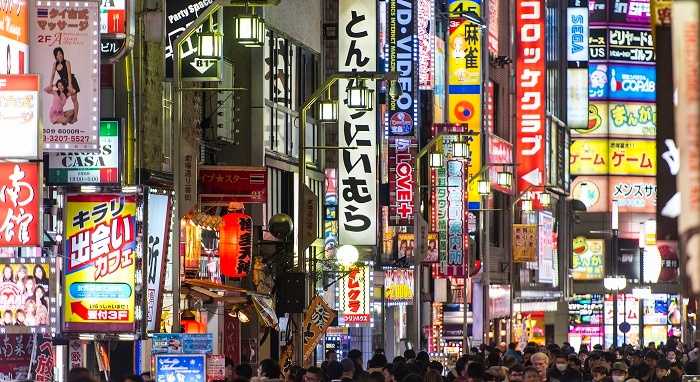 Anybody who visits Japanese websites will be struck by their loud banners, dense text, multiple columns, lots of tiny images, and an overall busy, crowded look. There are many articles explaining the reasons for this phenomenon, and I agree with them…but I also believe there is something deeper that continues to keep Japanese web design this way despite years of progress.

The short answer would be: It’s a cultural thing. But please allow me to delve a little deeper into what the culture is behind the clutter.

First let’s start with a few comparisons. Starbucks is a well known brand globally, and it also happens to be the most popular café chain in Japan. 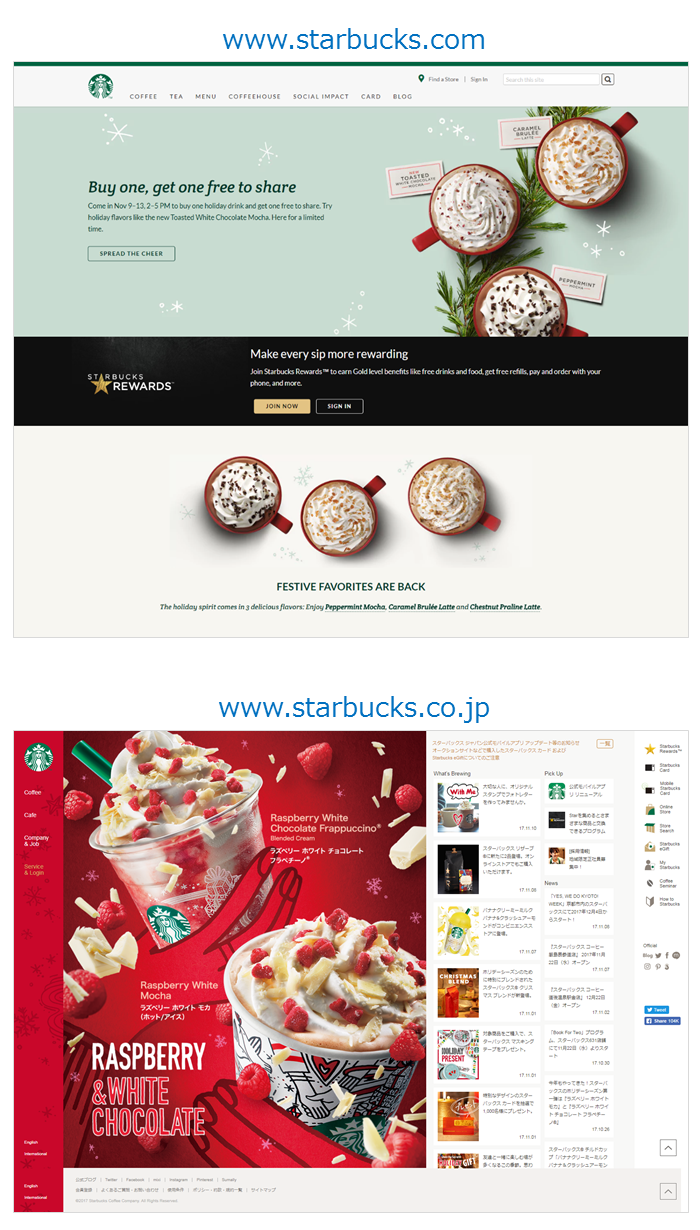 As you can see, the .com site is a lot simpler and cleaner, while the .co.jp site is more cluttered, featuring lots of densely packed text (which is too small to read here, but you get the idea). And it’s not because the Japanese site is localized haphazardly; this look is spot-on for Japanese customers who prefer to see everything on the first page. Their website is also the highest ranked among café chains operating in Japan, so we can assume that the Japanese audience isn’t hating Starbucks’ website.

Next, let’s look at a born-in-Japan brand to level the field. Here’s www.honda.com on the left, and www.honda.co.jp on the right. We see lots of images on both sides, but a lot less text on the .com site. 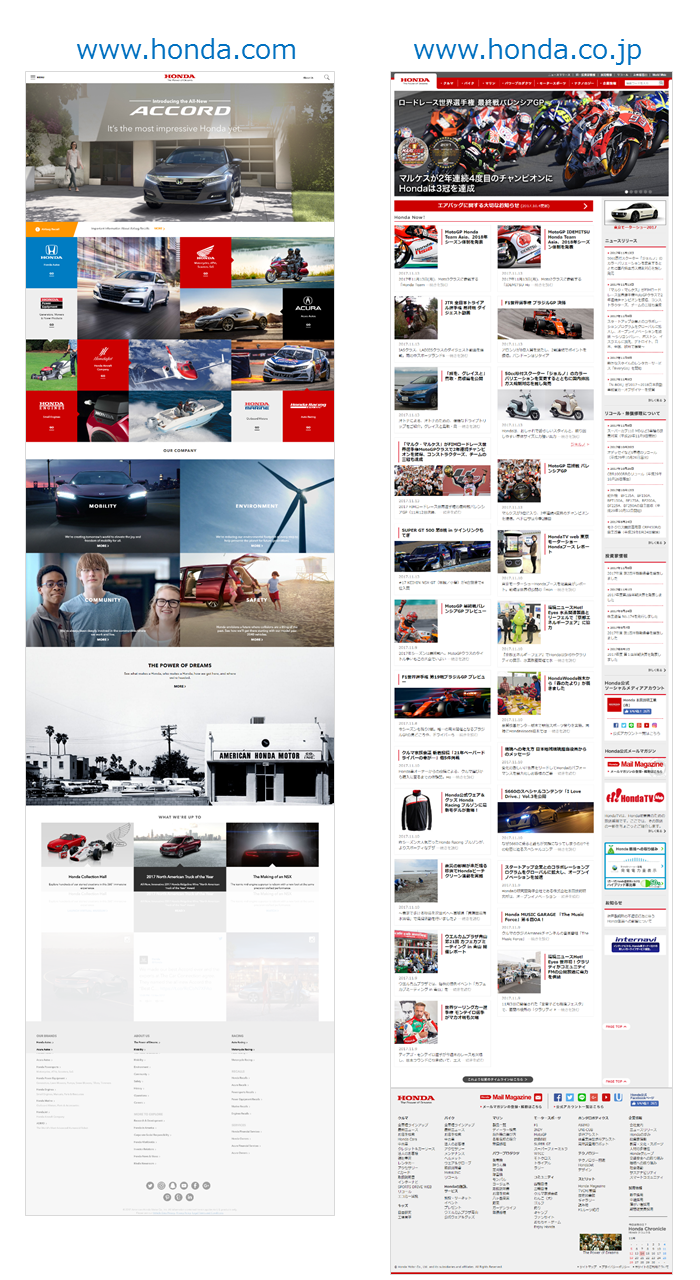 Honda is the #2 automobile manufacturer in Japan in terms of both sales and volume, but its website boasts the highest Alexa rank among automaker peers.

In two totally different fields, we see that the Japan-specific manifestations of globally known brands tend to be a lot more packed full of content. And the Japanese audience eats it up.

Okay, so what about Toyota, the #1 car manufacturer? Why is its Alexa Rank lower than Honda? Is it because their website is filled to the gills with too much information? Let’s take a look.

To the western eye, Toyota’s minimalistic and clean look may be appealing, but that doesn’t seem to be the case for Japan. Perhaps this is oversimplification? 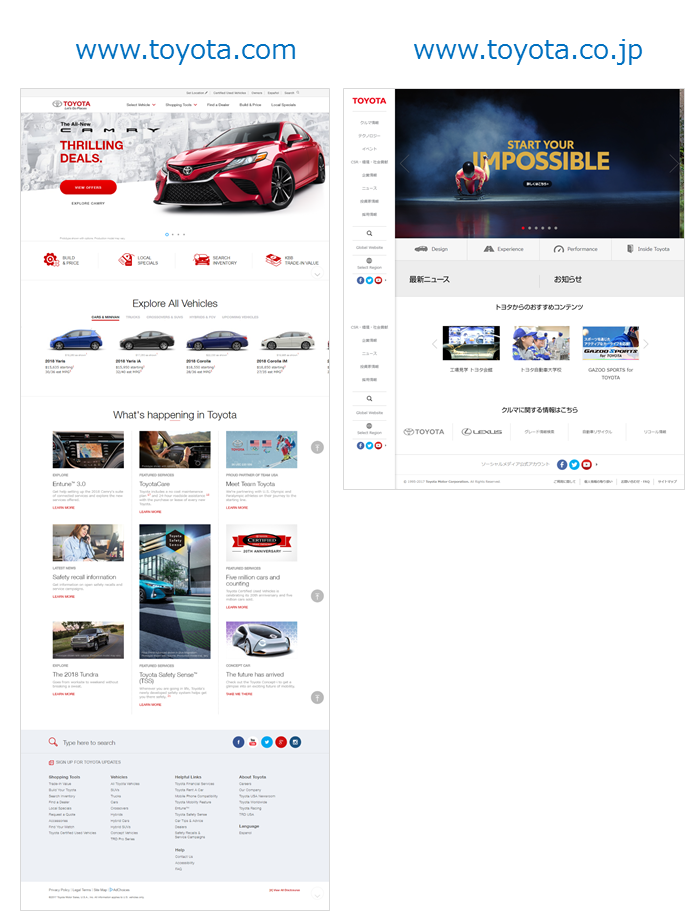 The Japanese consumer nowadays is more interested in value than prestige. According to Santander TradePortal, “price has become an increasingly important consideration for Japanese consumers.” But some aspects of consumer behavior remain unchanged. “Customer service aspects, such as technical explanations and adherence to delivery dates, are important elements in a sale.”

Although website design is increasingly effected by the UX requirements of mobile devices, much of the accessible information that Japanese consumers feel is important remains unchanged.

Japanese website design doesn’t happen in a vacuum. That cluttered look isn’t something unique to websites; take these fliers that come with the morning paper, for example. They’re called chirashi (チラシ) and Japanese consumers rely on them to find the best buys in town—from potatoes to pets, from cereal to cemetery plots. You might call them appalling. 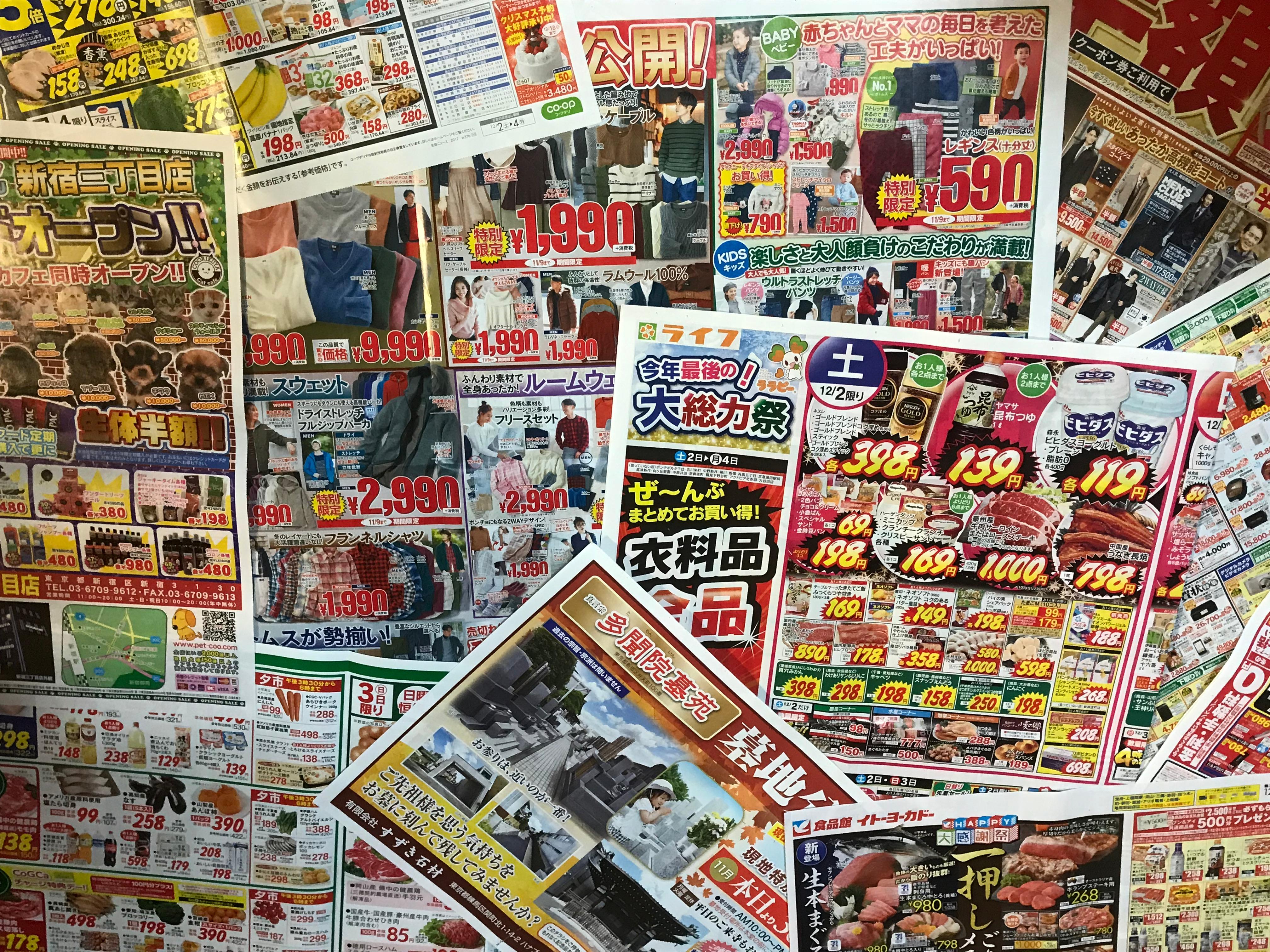 In 2005 when Walmart acquired a majority interest in Japanese supermarket chain Seiyu, they sought to discontinue the chirashi which they saw as archaic, but reconsidered in the face of major resistance by the local marketing staff. They were wise for listening to the locals and doing a one-eighty before taking 100% ownership in 2008.

Now, not only does Seiyu continue to send out their chirashi, it’s even distributed through online chirashi sites like Shufoo.net. This allows younger consumers who don’t have newspaper subscriptions to browse through chirashi without the paper mess. Which means the Japanese consumer’s eye, young or old, is well trained to scan through copious amounts of visual information to find the items they need.

Japanese people tend to require more information before reaching a purchasing decision. So for printed brochures, it is standard practice for Japanese companies to create one text-heavy version for the Japanese domestic market, and another “rest of the world” version that gets localized into multiple languages for markets worldwide.

Often the Japanese domestic version goes into more detail and mentions this or that technology as part of a product’s appeal. The non-Japan version focuses more on user benefits, oftentimes not even mentioning the technology that makes those benefits possible. Western thinking is, consumers want to acquire an experience, not a technology. Japanese thinking is, those promises feel more real when somehow linked to technology.

This diversity becomes a problem when trying to create a unified design throughout all markets on the web. One company countered the tendency of Japanese text to become bloated with technical references by implementing modules with strict character limitations. This did force the Japanese copy to become shorter (with support text provided on a separate page), but it also led to instances where Japanese designers would select modules with character limits that where adequate for Japanese text, but too short for western languages. But that’s another story.

Although the gap is closing among millennials, research shows that males tend to base buying decisions more on utilitarian criteria than females. This is true in Japan as well. And whether a Japanese male is a traditional type that makes decisions himself on behalf of the whole family, or the modern type who needs to convince a partner first, having technological talk points helps his case. He doesn’t need to truly understand the tech, he just needs to think that he understands it, so Japanese sites try their best to provide that environment.

Show it to me up front

As we all know, getting someone to click on your website is a challenge. Some sites only offer minimal information on the homepage, thereby urging visitors to click for more information. Many successful Japanese websites take another approach: showing visitors what they need up front. When visitors do click and go in, they are looking for something specific. As a tactic, this is just like the food replicas you‘ll find in restaurant window cases throughout Japan.

Before committing oneself to walking into a restaurant, Japanese customers get a really good idea of what the cuisine there looks like thanks to 食品サンプル (shokuhin sanpuru; lit. food samples). These taste-bud-arousing replicas are expertly made of plastic and wax, so they’re sometimes able to defy the laws of gravity and fluid dynamics in those showcases. Their purpose is to inform and reassure—which is what those cluttered Japanese websites do, too.

Zen is for monks, not merchants

The name “Japan” may conjure up images of rock gardens, temples, and tea ceremonies. This is part of why over 55 million tourists visit Kyoto annually. And after experiencing the serenity of the ancient capital, they often take a 60km ride to Osaka and get a taste of what’s totally the opposite. Kyoto might be the former political center of Japan, but Osaka was the commercial center for centuries. A merchant city with nothing subtle about it. Today’s Japanese commercial and corporate websites are, in a way, descendants of this Osaka style of 商い (akinai; lit. trade, business).

In the fashion industry, however, major brands like Dior, Chanel, and Gucci all have websites with a universal design that’s shared across markets globally, including Japan. In cases where you are mainly reinforcing your brand image, and not trying to convince someone to buy, a re-worked Japan-specific site is not necessary. In fact, having the Japanese site on a par with the “home” version works to its advantage. But if you want visitors to do something more than feel emotionally fulfilled, be sure to fill the page with what they need to see, Japan style.

If this topic interests you, you might want to check out my follow-up article, What Japanese users Are Looking For in Website Design.